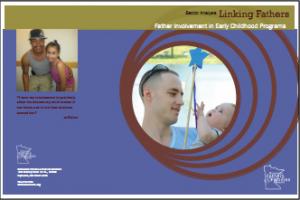 Father involvement in early childhood programs has increased over the past decade. But barriers that prevent their involvement still exist including:

The biggest barrier to involving fathers in programming is a father’s work schedule, followed by fathers not living with mothers and children, lack of male staff to whom fathers can relate and disagreements between fathers and mothers.

Steps to engaging fathers in early childhood programming include: a culture of inclusion with father friendly environments; assessing needs and motivations to cultivate father’s buy-in; and providing diverse opportunities for engagement.

When fathers are regularly invited to their children’s educational activities, it encourages them to be involved, lets them know that their participation is not only welcome but expected, has the potential to strengthen the child’s educational experience and forges a stronger relationship between family and school.
Survey respondents included practitioners from Early Childhood Family Education (ECFEs), Head Start, School Readiness, home-based child care and others along with fathers with early childhood program-aged children from throughout the state.

Key research findings regarding father involvement include: children do better in school and life when there is positive father/male involvement. Children benefit by having both parents involved. Fathers are an integral part of children’s lives and should be included in all aspects of the child’s care. And healthy male role models are vital to children’s healthy development. If the father is engaged in the family and parents share common child rearing principles, the child will be more balanced and ready for school and life challenges. And if fathers hear that parents are their child’s first teachers, this will help encourage father involvement.

In terms of gender equity, fathers are often forgotten in the role of parenting. Children receive care from their dads that they can’t necessarily get from their moms. Both parents are equally important. Dads also are important because they help with the building blocks for children’s relationships with male figures as they grow.
Children with a good father figure have less identity problems and do better in life. An actively engaged father can lead to higher self-esteem in children, more discipline, can speed intellectual development and a better sense of family. The more involved in actively raising and educating that fathers are, the better chance that their children will get a good education, resist peer pressure, stay away from drugs and will seek more positive role models.

84% of professionals indicated that a fathers’ lack of time/conflicts was the major barrier to limited early childhood program involvement. 43% said lack of male staff. 37% cited not knowing how to get fathers more involved.

Successful stories that address the top barriers that fathers face include the following titles:

Scheduling classes and special events on weekends, mainly Saturdays, are becoming more popular. A West Metro area child care center plans one-on-one family/teacher meetings around father schedules. A Head Start program in Northern MN schedules some of their parent training sessions at the same time that parents pick up their children making it easier for them to attend. Many ECFE programs offer classes specifically for fathers and their young children. These classes are called “Daddy and Me” or “Date with Dad.”

The survey was conducted by the Minnesota Fathers & Families Network. MFFN is the state’s premier center for training, research dissemination and policy development for professionals committed to understand and promoting healthy fatherhood. MFFN enhances healthy father-child relationships by promoting initiatives that inform public policy and further develop the field of fatherhood practitioners statewide.