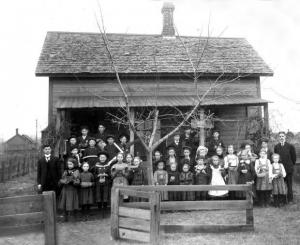 Only women taught school in the very first years of Winona’s public school history. The low pay ($20 a month) did not attract men. Secondly, women, it seems, were considered more capable of handling the difficult discipline problems which cropped up in classes composed of children of so many different ages and backgrounds. The theory among early educators in Minnesota was that the young ruffians would be more polite to a woman.

The theory wasn’t always right. Teachers often had to resign because they couldn’t discipline their pupils. Led by the bigger, older boys, pupils sometimes turned classes into free-for-alls, with chalk, erasers, and other missiles flying about the room.

Winona pioneer Charles E. Ely described the situation aptly when he said, of one early woman teacher, “She fought the mainsprings of deviltry in youth of that date.” The first schoolmaster in Winona was Henry Bolcom, a graduate of Oberlin College, hired in 1856. He taught 30 pupils in a classroom at Second Street between Walnut and Lafayette.

The number of men increased for a while, in the late 1800’s, but educators became alarmed in 1908 at the rate they were leaving the profession. A report published that year in the Winona Normal Bulletin stated:

“The number of men in public school service has so decreased that in this country at present less than ten boys in 100 ever come in contact with a man teacher.” In 1880 in Minnesota, the report pointed out, 36 percent of total teachers were men, and in 1906, only 6 percent.”

Arguing for an increase in men teachers, the bulletin quoted an article, written by the New York City Male Teachers Association: “We hold that, in the nature of things, the man can most effectively influence the boy. If the boy is to be prepared for contact with the world, he should in school come under the direct forceful control of a man.”

The Winona Bulletin article hastened to add, however, “No intelligent person questions the immense value of women’s work in education.”

Married women were a problem to the board of education as early as 1887. The question was whether they should be allowed to teach. The board decided that the practice would establish an undesirable precedent, and a married teacher was notified that her resignation would be expected at the termination of her contract.

Low teacher’s salaries caused deep concern to educators back in 1906, according to a bulletin of the Winona State Normal School.

“Wages of the unskilled laborer are better than those of teachers of all classes,” reported the bulletin in a published account of a survey by a Minnesota Educational Association committee on teachers’ salaries and living expenses.

The survey was made in 1906, in view of higher scholastic requirements for teachers and the fact that teacher’s salaries had not kept pace with a rising cost of living. The average annual salary for all Minnesota teachers was $411-$50 leas than the annual income of section men on railroads. Minnesota women teachers, the committee learned, however, earned below the average, making $336 annually, or less than the average domestic servant whose income averaged $364 in Minnesota for 1906. (Minnesota teachers were faring somewhat better than the national average annual salary of $368.)

“A young man of good ability would have 13 times more chances for a living salary in Winona in dentistry than in education,” the MEA committee claimed, urging that salaries for teachers in Minnesota to be raised.

Said the committee: “Our plea for an understanding of the teacher salary question by the public at large is not primarily a selfish one. Our primary interest … arises from the fact that we are citizens who love our country and who fear that a half century of present school salary conditions will see us dropping behind civilized peoples of the world because the public elementary schools shall have become a weak, insufficient, make-believe, where senseless ‘isms’ and shoddy work will predominate.”

“If the teachers are not earning more than they get, then the welfare of the state is jeopardized. The education of the young is too delicate and too important a work to put into the hands of persons who cannot earn more than $368 a year.”