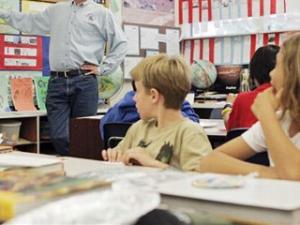 [MenTeach – This article generated hundreds of comments from readers at the ABCnews.com website. After reading the article, there is a link at the end. Go read a few to see whether you agree.]

Of all the historical gender disparities in the American classroom, one has quietly stagnated for the last 20 years. Men still account for 16 percent of all elementary school teachers, according to a 2003 National Schools and Staffing Survey.

Advocates like the National Education Association have called for efforts to support young men interested in teaching, but sometimes it’s the parents who carry on mistrust and sexual stereotypes.

“…I was okay with our teacher assignment until I realized that not only is my son’s new teacher a man, (wait for it Mitch McDad, don’t get your boxers in a bunch just yet), he is also young and single! What’s a young single dude doing teaching fourth grade anyway?!””

A similar discussion erupted on a Detroit’s parent blog called Momslikeme earlier this month. A slew of self-conscious but clearly prejudiced posts responded to the question: “Do you think it is appropriate or inappropriate for young men to be teaching the little ones?”

Opinions ranged from “personally I think it’s a little weird,” to men are too rough and “if I had a male teacher in my K-3rd grades I would have freaked,” to support for male teachers as strong mentors for fatherless children.

But Bryan G. Nelson, a teacher with 30 years of experience, has heard these inaccurate assumptions, and worse.

“Most people really want men teaching their children, but it does happen occasionally,” said Nelson, who is the founding director of MenTeach, a support and recruitment organization for male teachers.

“I had a parent who was complaining and concerned about me working with her daughter,” Nelson said. “The kid really liked me a lot, and because the child was liking me so much the mother got worried and suspicious.”

A Career Path With High Stakes
Nelson said the mother’s suspicion of a perverted relationship was quickly resolved within the school’s staff and the mother eventually opened up about being strained and flustered by a divorce.

But Nelson, who took a graduate fellowship at Harvard to study men in education, found that overzealous suspicions of sexual abuse are one of the top three reasons why the teaching profession doesn’t draw more men. From his research, the other two reasons are perceptions about men’s nurturing abilities and low social status combined with low pay.

Male and Female Stereotypes
“People don’t think of men as caretaking or nurturing, which many of the young grades require,” Nelson said. “And if you’re a single man and you’re going out to date somebody, when they ask you ‘what do you do?’ it just doesn’t have the same cache as saying I’m an engineer or a scientist.”

Anecdotes of such stereotypes and biases pepper the positive personal stories sent into the MenTeach organization. Across the country men get weird looks, to assumptions that the teachers can’t handle potty issues, to reactions form fellow teachers.

“I was about to graduate and was applying to schools hoping to find a teaching job. The teacher asked what grade I would like to teach and I was surprised that she kind of laughed when I told her I wanted to teach in the primary grades,” wrote Mark D. Hedger, now a principal in Holden, Mo.

“Even though I had volunteered in her classroom, she acted as though it would be very strange for me to actually be a teacher at this level,” he said.

Nelson said his research and experience as a male teacher led him to start working as a consultant to school districts that are trying to restructure the curriculums for male teachers. He believes the identity of children’s teachers should reflect the child’s larger community, including a 50-50 ratio of men to women.

But for all the enthusiasm over recruiting male teachers, media representatives from the National Education Association and the National Parent Teachers Association say there aren’t notable studies or research about the real influence of a teacher’s identity and gender.

The Real Importance of Gender
“I really think it has a lot to do with the personality of the teacher,” said Dr. Caryl Oris, a consulting psychiatrist for the Sewanhaka Central High School District on Long Island, N.Y. “What matters more than anything is that it’s a good teacher and the teacher loves to teach.”

Oris said what worries her more than whether there are enough male teachers in elementary schools are parents who actually express their unease with male teachers.

Student and Teacher Relationship
“Children have their own anxieties about going to school. They shouldn’t have the burden of the parents’ anxieties as well,” Oris said. “If the parent is concerned, I think that it is something the parent is reacting to from their own life or their own experiences and projecting that onto the child.”

That’s precisely what Payne, the author of the milehighmamas blog post, admits to doing.

“A couple of the commenters were put off about my opinion of young male teachers,” Payne said. “I won’t apologize for it. That was my experience, although I admit it was narrow, from working in the Los Angeles County Unified School District.”

However Payne did exactly what Oris would recommend: She met with the teacher.

“I was a little nervous about what to expect with this teacher,” Payne said. “But I knew immediately that he did mean business.”