on September 7th, 2017 Posted By BG in Key Articles
by Mimi Kirk - Citylab 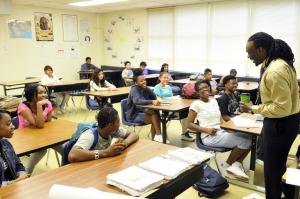 A recent study found that black students who have at least one black teacher do better in school. Making policy around this research is complicated.

Ashley McCall was teaching her third grade students about American voting rights last year when one of them asked a question she couldn’t answer: How do older people of color process the evolution of the right to vote?

McCall, a black teacher whose student body is mostly of color, asked her own grandparents to do a video conference with the class. They fielded students’ vibrant inquiries about having lived in the south during the civil rights era.

“It was awesome,” says McCall.

McCall says her identity has been crucial for her students at César E. Chávez Multicultural Academic Center on the south side of Chicago.

“Having teachers of color allows students to see people who look like them in positions of influence,” she says. “Students believe they can assume their own roles of authority.”

McCall’s perception is backed by new academic research. A recent study published by the Institute of Labor Economics found that if a low-income black male student in third, fourth, or fifth grade has a black teacher, he is 39 percent less likely to drop out of high school. And if a low-income black male or female student of the same age has a black teacher (especially of the same gender), they are more likely to plan to attend a four-year college. Females were 19 percent more likely to express this intent, while males were 29 percent more likely. The benefit came from having just one black teacher; having two or more black teachers did not alter the results.

Yet teachers of color are a relative rarity. The National Education Association has found that while students of color make up almost half of the public school population, teachers of color comprise only 16 percent of all teachers. Black teachers are also more likely to be clustered in high-need, economically disadvantaged urban schools.

The question becomes, then, how do we hire more black teachers, and get them to the right places?

When the new research on black teachers was first released, it provoked some controversy over this question. Seth Gershenson, a co-author of the study and professor of public policy at American University, says that he and his co-authors fielded a number of incredulous messages on social media asking whether they were advocating for resegregation.

Some have interpreted the study’s results as proof that integration is not an effective tool to address the achievement gap between black and white students. Rafiq Kalam Id-Din, co-founder of the Ember Charter School for Mindful Education in Brooklyn, says that the research confirms that putting black and brown students with wealthy white peers and teachers doesn’t bring about better academic outcomes for them.

“Integration doesn’t address the roots of the problem,” he says, noting that white teachers and administrators fail to appropriately consider and account for the culture and life experiences of children of color. “Black teachers are far more apt to do this instructionally.” As such, Ember’s staff, which teaches a student body that is majority of color, is 95 percent black and Latino.

But Gershenson and his colleagues emphasize that segregating students is not the takeaway from their study, nor is it the message they want to send. Indeed, the academic community broadly argues that racial balance in education is good for students of color as well as white students. “For instance,” Gershenson says, “while it isn’t covered in our study, social science research shows that white kids also benefit from having a black teacher because it counters their biases.”

Gershenson says researchers haven’t entirely unpacked all the reasons why same race teachers matter for black students. But dynamics such as the role model effect play a central role.

James Ford, who taught history and sociology in a Charlotte, North Carolina, high school for six years, said his mere presence made a difference to the students he taught. “I’m a black man with dreadlocks. The moment I set foot in the classroom, I instantly show the possibilities available to them,” he says. Ford adds that his background allowed him to reach his students more effectively. “If there was a concept that was difficult to comprehend,” he says, “I would use ebonics, and it instantly gave the kids access to ideas they had never heard explained in a language they understand.”

Same-race teachers can also affect relations with parents. “Black parents may be more comfortable dealing with a black teacher than a white teacher,” Gershenson explains, “and the benefit of this shows up in their greater involvement in school.” Such parents’ children, he adds, have higher attendance rates and lower suspension rates.

The solutions Gershenson promotes are more focused on ramping up hiring of black teachers in the first place—and keeping them—than about moving teachers and students around.

Gershenson says that though recruitment and hiring is an important goal, the “pipeline problem” makes it difficult. “There are fewer black students entering college who could be black teachers,” he says. “Getting more black students on that path is a long-term goal, but if that’s all we worry about, it will be too little, too late.”

Gershenson recommends retention strategies such as teacher coaching and mentoring, especially in the first three years of employment, when teachers are most apt to leave. Yet an equally, if not more, important fix is salary. Gershenson believes that retention problems could likely be solved by increasing teachers’ salaries and giving cash bonuses for working in high-need schools. “A sizeable bonus might be necessary, but it could work,” he says.

Of course, this would take money—something that isn’t often readily available to public schools, particularly those in low-income areas. Gershenson notes that a less expensive intervention to support students of color and their chances of becoming teachers is combating implicit bias in teachers. This unconscious practice found among teachers of all races singles out students of color for punishment and contributes to the fact that black students across the U.S. are three times as likely to be suspended or expelled as their white counterparts. This creates a “school-to-prison pipeline” through which students of color enter the juvenile and criminal justice systems straight out of school.

Jason Okonofua, a professor of psychology at the University of California, Berkeley, says that a few new strategies show promise in overcoming implicit bias. One is training teachers to give “wise feedback,” meaning setting clear and high standards and assuring students that they can reach them. Another tactic aims to help teachers adopt a more “empathic mindset” in response to student misbehavior, especially misbehavior from stigmatized students. The program has reduced suspension rates by half in a number of schools.

Many teachers are already practicing such approaches. “I have incredibly high expectations for my students, but those expectations are grounded in empathy,” says McCall. “I tell them I set a high bar for them not because I’m ignoring their circumstances, but because I believe they can overcome them—and they do.”

Mimi Kirk is a contributing writer to CityLab covering education, youth, and aging. Her writing has also appeared in The Washington Post, Foreign Policy, and Smithsonian.