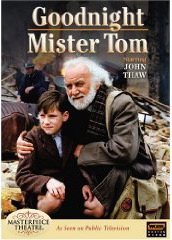 “Goodnight Mister Tom” is a ‘masterpiece theatre’ production originally aired, I believe, on public television (circa 2005). Based on Michelle Margorian’s novel (winner of the 1982 IRA Children’s Book Award), by the same name, this story centers on a somewhat bedraggled, single, and sour-aged man. Living quietly and at war (privately and ironically) with the world around him, his self-imposed tranquility is suddenly and irrevocably altered by the evacuation of children from London during the Blitz (1940). He is ‘forced’ to care for a child (a young and emotionally ‘damaged’ adolescent male named Willie) and, as might be expected, together overcome each other’s misgivings. Set against a backdrop of a world war, the bonding between the evacuated child and the elder citizen build to a climax of understanding and, in some small way, personal growth and enlightenment.

While not a terribly well crafted cinematic epic and taking far too many liberties with the original novella (“The Fireman”) and novel (originally published in 1953), “Fahrenheit 451” (directed by Francoise Truffaut and featuring Oskar Werner in the title role) certainly illustrates the bond between a disillusioned young man and an elder male father figure. Although primary an analysis dealing with censorship and state control run amok; “451”, at another level, makes a strong statement for males working with males in a literary pursuit.

Kevin Klein gives, in my view, a masterful performance in the flick “The Emperor’s Club” (distributed in 2002). This morality play (covering a number of years and centered on the concepts of honesty and integrity) was adapted from the short story “The Palace Thief”. Anchored in the somewhat rarefied world of a New England prep-school, the central character is a male teacher (who teaches classics, no less) and influences and is influenced by his young male students. In a sense, the theme comes full circle with the characters’ children attending the school (now co-ed) decades later. While imposing the power of the teacher (in a similar manner to “The Prime of Miss Jean Brodie”), this film also illustrates how long-forgotten adolescent events are not always forgotten and without consequence.

The National Film Board of Canada (NFB) has a long history of producing quality and award winning films. Unfortunately, from a cinemegraphic point of view, this film is not one of their most stellar productions. None the less, “Thieves of Innocence” (French title: “les voleurs d’enfance” with English sub-titles [2005]) describes a ‘black’ period in the Province of Quebec’s recent past by exploring how children (many of whom were young/adolescent males) were abused and mistreated while supposedly within the protection of the authorities. This is not a documentary for the faint of heart and most probably illustrates a societal phenomenon that can be replicated in many other jurisdictions. This is a most provocative film that paints a very negative picture of professionally trained authority figures (of both genders) who failed to meet the most minimal of standards.

“My Brand New Life: Ballet Dancer/Hockey Player” (another NFB film [2006]) explores two very different physical endeavours. Pasquale lives for hockey (ice, that is) while Nikita is a ballet dancer. Needless to say, neither has ever seriously thought about exchanging roles. What happens when these adolescents challenge each other’s sport? The results are surprising and lead to two youngsters discovering a great deal about themselves and about the adults who study the respective elements.

There is nothing like a disillusioned history teacher to bring out the best in adolescent males. So, we cannot be at all surprised at the performance of Jeremy Irons as Mr. Tom Crick in “Waterland” (released in 1992 and adapted from the 1983 novel of the same name by Graham Swift). Crick and his child sweet heart wife are approaching middle age; scared by some long forgotten traumatic personal event, and mired within the educational landscape of their not quite settled community. While they are individually and as a couple experiencing their own trials and tribulations, Crick must deal with a new brood of students. The aura of ‘history’ ties in with the human ‘narrative’ to produce a somewhat dark tale dealing with adults and adolescent males and unforeseen consequences.