on May 2nd, 2013 Posted By BG in Letters
Anonymous 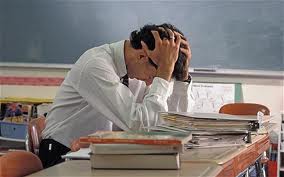 A female and male student, both 6th graders in my class room, teamed up to falsely accuse me, a 12 year veteran, second career male teacher. Both claimed inappropriate touching. The boy wanted to get out of after school tutoring. The girl, frequently off task and written up more than once, wanted to retaliate, and she was jealous of her cousins. Add to that her mother was going through a divorce making her, according to her sister, very angry and bitter.

In addition to the allegation of inappropriate touching on her by the female student, she also spun a tale that I was having an affair with a 14 year old girl, her cousin, who also attended my school, not in my classes. She further alleged I had taken the 14 year old girl on a 90 mile trip to Las Vegas to go shopping. This is so convoluted that numbered player jerseys almost need to be issued. Perpetrating girl (to be known has “H”) has three girl first cousins. They are “M”, “L” (the alleged object of my affections), and “E”. The three girls’ parents, therefore “H’s” aunt and uncle, are “C” and “B”.

As a junior varsity volleyball coach, “L” was on my team. Her work furloughed father “B” asked to be my assistant coach. “B” was referred to the principal who cleared it. Shortly after he started with me, “L” was called up to the varsity. “B”, being a good and decent man, continued to work with me on the JV level. He was very helpful and certainly instrumental in the JV teams, after a slow start, ability win 4 of the last 5 matches.

During the season, I became acquainted with “B’s” wife “C” and their other two daughters “M” and “E”. In fact “M”, arriving too late in town to make the high school volleyball team, was very helpful with my team and the varsity. She was frequently at our gym. “C”, along with “E”, was also there because the family only had the grandparents car to pick up the girls as there were no after school buses.Noting that “B” had gotten a raw deal in the economic downturn and being very appreciative of his volunteered efforts, my fiancé and I took “B” and “C” out to dinner. They noted that they were very pleased and that being new to town, we were their “only friends”. Several weeks later, my fiancé and I invited the entire family to our home for dinner and playing cards.

A month or so later, “B” was notified by his union that his job in Topeka, KS had been re-instated. The plan was to have him go back to work with “C”, “L”, and “E” to join him after the school year ended. The high school girl “M” was going to stay with the grandparents in town to attend the high school the next year…her senior year…so she would not need to start all over athletically and theatrically. In celebration and in farewell, my fiancé and I took the family out to dinner.

Shortly after “B” left, “C” had to undergo major surgery. During her recovery and to give her an evening free of her very active girls, my fiancé and I took all three girls for bowling and dinner. At no time was I ever alone with anyone of the girls. A sister or my fiancé were present at all times.The cousin “H” was aware of all this attention, mostly because “C” had been very vocal in her appreciation of my involvement with the family. “H” also was aware that whenever “L” saw me at school, she would run up and give me a hug. “H” also saw us sitting side by side at the school’s basketball games at the scorer;s table. I was the time-keeper and “L” was the team’s official scorer. Where else is the sitting situation for these two positions at every basketball game ever played?

It is my theory that “H” came up with the “kill a man” story because she:
1) was angry with me for the deserved write-ups,
2) was jealous of the attention to her cousins, in particular the popular “L”, and 3) she “caught” the “anger at men” exhibited by her mother towards the ex and any man in general.

Knowing the story could not stand up without some “back up”, she enlisted her class mate “CD” to come up with his own story. He went for it because it would get him out of after school tutoring, and put him in a good position with the girl “H”.

It is my theory that “H’s” mother, bitter and angry at how her life was going, bought into the story because she wanted to show her daughter solidarity and it was an opportunity to “get” a man. “H’s” mother was jealous that her sister had a long-lasting marriage and that things were looking good for her future. Additionally, it gave her a chance to discredit her sister’s positive comments about me.

The school site turned the claims over to the local police for criminal investigation and put together a one-sided report on all of this. Without waiting for exoneration from the criminal investigation, I was presented with a “resign and be quiet” or your teaching credential will be affected demand. At no time was I interviewed by school administrators or the police department. At no time were witnesses to “my side” interview by school administrators or the police department. “C” told me that she called the site administrator the minute she got a call for an interview with “L” and repudiated any negative claims involving her family. Not one word of that conversation was in the “report” shown to me to “encourage” my resignation.

Questions from MenTeach and his reply:

This is (a state in United States), a “right to work” state, which is a euphemism for non-union. I have the proverbial scarlet “A”, or should I say, “scarlet “P” on my chest in this community. I am awaiting an official definition from the police department that there are no criminal charges and then I’ll decide if I want to pursue civil and/or criminal charges about the false police report and libel or slander or whatever is appropriate.

Two things are slowing me down in that arena. One is the fact that through the stellar reputation of my fiance in a city about 40 miles away it looks like I will receive job offers for any one of 6 positions. Therefore I do not wish to “rock the boat”. The other item is that to “prove” my innocence I will need to have numerous students involved. Is it right to drag them into this? I don’t know.

I have somewhat forgiven the boy because he actually accomplished something from this which is getting out of after school tutoring. But it will be a cold day in hell to forgive the girl because all she got out of it was retaliation, attention, and venting against me when the real “vent” needs to be against a father who is divorcing the mother. The mother, by the way, is the sister of my main supporter in all this and she had described the girl as self-centered and mean long before any of the accusations. She has also described her sister as very bitter and angry about the divorce. Up steps a beautiful target….me!

The lawyer I hired and the lost income from not teaching the final 30 days of school have cost me around $5,000 to this point to say nothing of the cost of possible re-location to another school district. The lawyer has constantly told me not to say anything to anyone. She was in the “resignation” meeting and right when I was about to defend myself with pertinent facts she told me to “shut up”. Which I did.

The thing that hurts so deeply about all this is that I have been in this area for five years and have a sterling reputation. It “kills” me to think that students and parents who looked up to me and were pleased with the personal and instructional guidance I provided now, by virtue of my forced non-defense, must have doubts.

I suppose I have supporters still and could have made a positive case in front of the school board but in the schools’ investigation my real sin was revealed. In an abundance of concern I did violate school policy by giving two female students a ride home on four occasions WITH THEIR MOTHER’S PERMISSION, a permission that was confirmed by the investigation. The girls were always together. The older girl I had known for three years. She had been in my class, on my volleyball team, and in my after school tutoring at the previous school.

Let’s see, why would I have done such a thing? Two days before Christmas the girls’ father died in a car accident. Into the new year, the mother had major surgery, the grandmother with whom they lived was on dialysis, and the kids reported they were eating Top Ramin for dinner. It was taking the girls 2 and a half hours to get home from school because the older girl had been beaten up at their neighborhood school, and the bus transfer point was in the worst part of town. Shame on me!

Anyway, thanks for your response and concern. I suppose I have myself to blame but it is a shame that the worst is thought of people who are giving their best.

MenTeach: He is going for interviews for a new teaching job and here is his experience:
I am 9 years older than my sister and brother so was very much aware of them as primary grade students. When I entered teaching I really wanted to teach primary. As far as I’m concerned, that’s where the real education happens. Also I had a “Psychology Today” magazine article that indicated that with all the female head of households that 4 to 8 year old children, especially boys, needed a positive male influence in their lives.  The lowest I got was fifth grade.

I got three very distinct feelings from the numerous interviews I had. As a second career, I was in the age category that gave “points” to school districts to interview me. One of the feelings I got was that administrators (mostly female) did not want someone around they felt they couldn’t control.  This despite my being very contrite and not overly assertive in the interviews. They wanted a 20 something they could boss around.  Secondly, I felt that the administrators were willing to put up with one of those (male) at home but didn’t want to put up with one at work.  And lastly, I got the impression they were all afraid they could possibly hire a….you know. I was actually asked in one interview, “Why on earth would you want to teach primary?” Of course, it was a woman who asked it.

I’ll let you know what happens.