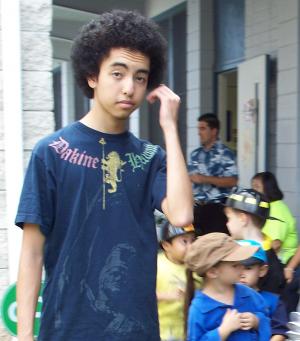 Dear Mr. Matt,
I just wanted to let you know how much you helped my family and many others in the short time you worked at my daughter’s preschool. When I first meet you I was mostly excited for myself, I thought it would be a good opportunity for me to recruit another male in ECE. I knew it would be good for my daughter to have a male teacher, but I honestly thought it would be more impactful for the other families since I spent so much time with her.

Boy was I wrong.

You helped me to discover my daughter’s hidden fear of men. I know it wasn’t easy for you to tell me that you suspected she may have some male stranger anxiety. And I appreciate that you continued to communicate your feelings even after I doubted you. Because one day at a friend’s house I notice what you had been trying to tell me for weeks. Even in the presence of a male that my daughter is comfortable with Kea may still exhibit some fear if that male is directive with her. I am sure this type of reaction to men was happening for quite a while, but it was masked by her general shyness with all strangers. I probably would never have spotted this issue without your help. This changed the way I approach all situations in the future regarding other males. The adjustments were easy for me I deal with this type of stranger anxiety constantly in the infant/toddler classes I run. Her reactions to men are no longer as dramatic, partly due to your constant exposure to her during her 1st preschool class but also because you helped us to explore her specific issues involving men.

This new found focus on the intricacies of male stranger anxiety began to affect other families in my program. I immediately began working with two families who also had similar stranger anxiety issues. The first family involved a girl named Khailyn who was about 18 months old. In her case, we were already actively working on her fear of men thru sensitive exposure to myself, my co-worker Kaleo, and the other dads in our class. But after my experience with you I knew we could do better. Thru close observation we were eventually able to find the foundation concerning her fear of men. Her fear was based on the general appearance and body type of any male she was exposed to. Unlike my daughter this girl feared a certain “look” regarding males. Our team used this information to help her mother make adjustments in the presence of a “scary” looking man. And now that mom knows what to look for and how best to support her daughters fears, Khailyn has adjusted well and her negative reactions to strange men has decreased dramatically during the time she was in our program.

The second child I meet in our introductory Baby massage class, her name is Teilyn and she was about 6 months old. Her grandmother Lorna helped us catch her stranger anxiety early, as she reacted strongly to both myself and my co-worker Kaleo. I sensed that this was a different situation than with Khailyn and I took every opportunity to improve Teilyn’s receptiveness to myself and Kaleo. Teilyn seemed to adapt better to other new males in our class once she was comfortable with both Kaleo and I. And her adaptability to this fear increased thru ought every series of classes. Now she is almost 3 years old and about to graduate our program. Grandma no longer has to make adjustments for Teilyn’s fear of men, Teilyn usually handles it on her own now. This was a perfect example of “windows of opportunity for learning”. I discovered the younger I catch certain specific developmental issues like male stranger anxiety the more impactful my influence is for the child.

These were just the first two families I helped after you helped me. In the last two years I have helped at least a dozen others with similar issues. My experience with you showed me how influential just one male teacher can be, even for a short period of time. It also showed me how much more influential I can be as a male infant/toddler teacher if I just look for “windows of opportunity” more often.

Kea was very sad when we found out you were not coming back to her pre-school. And I felt bad because I never got an opportunity to thank you for what you did for my family and many others, Aloha and Mahalo Nui Loa Mr.Matt you were a great teacher.