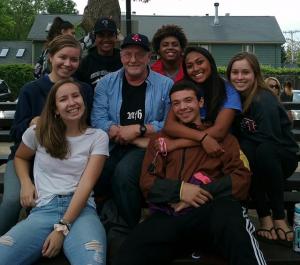 2017 NAEYC M.E.N. Interest Forum Champion for Men and Children Award
James (Jim) St. Clair began his teaching career in 1970, and worked as head teacher, lead teacher, director, and college instructor. In 1985 became a Kindergarten teacher in the Cambridge Public Schools at Escuela Amigos and worked until retirement almost three years ago. At times he was the only male Kindergarten teacher in Cambridge but soon gained many supporters among families, teachers and former students.

In retirement he continues to work in schools and singing in parks for children. He has been very supportive of MenTeach – New England organizing last year’s Winter gathering and talk at Wheelock College. He is now on the Defending Early Years national committee speaking out against school policies to minimize and eliminate play in the classroom and the privatization of public schools. He received our Annual Steve Shuman Men in Early Education award in 2010 and is important to us in New England.

2017 NAEYC M.E.N. Interest Forum Leader of Men and Children Award
Patrick Romero has been a male in ECE since college at San Francisco State University since 2011. He has worked at Horizons for Homeless Children in Roxbury, Mass, for Noe Valley Nursery School in San Francisco, CA, and currently for Mission Neighborhood Centers, Inc, as a Teacher for Head Start.

Patrick has worked diligently to increase the number of men working in ECE by offering Fathering programs, by creating environments that support both men and women, and by offering and advocating for greater acceptance of rough play in EC settings.