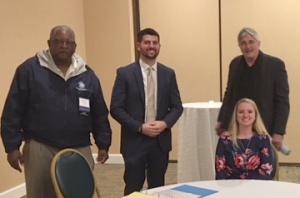 MenTeach – New England held a series of activities surrounding the Massachusetts AEYC annual conference which included the visit of Rodney West of San Diego, national Co-facilitator of the NAEYC Men’s Interest Forum, a table for the conference, a Reception with the MAAAEYC board in which annual awards were given, dinner for MenTeach meetings, a visit with NAEYC President-elect Amy O’Leary and visits to two child development centers in Massachusetts. It was a busy five days.

We brought Rodney West to New England to help bring more men, especially Men of Color into involvement in  our group and increase our presence and the issue of men in the early childhood community. At the Massachusetts AEYC conference we set up a MenTeach table and met many educators increased in our work and its importance.

At the annual MassAEYC Awards Reception we gave two awards: The Steve Shuman Award in Support of Men In Early Education and Care to Christopher Stetson, a long time teacher and musician at the Smith College Early Education Center where he is a toddler teacher.

A second Award given to William Connell, a teacher at the Primrose School in Burlington, MA who incorporates yoga, soccer, meditation, golf and obstacle courses in his preschool curriculum. Rodney West gave an introduction to national MenTeach.

Rodney’s visit also included meeting in two preschools with Directors and teachers one being a nature based preschool in Ipswich , MA and African American preschool in Mattapan, MA. Amy O’Leary, President-elect of NAEYC sat in a meeting with us discussing the Men’s Interest Forum and issues concerning NAEYC.

It was a great five days in Boston for MenTeach and has given us more energy to reach out to more men and allies. Thank you to PEACE Interest Forum and Willow Tree Early Education Team for helping us bring Rodney West to Massachusetts.

Thanks to the help of Jim St.Clair, Jerry Parr, Jeffrey Robbins, Dave of Kaplan, Kitt Cox, Clarence Little, Stuart Cleinman., Devin Meyer. Thanks also for a Grant from PEACE (Peace Educators for Children Everywhere) and a donation from Willow Tree Early Education Team for financial help on this adventure. Thank you for everyone.