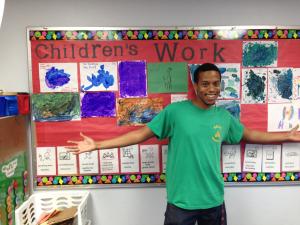 Jason Williams – PK teacher at Greenville Ave Child Development Center, where Deborah Henderson is Director. He has a CDA, TEEM trained, and is a T.E.A.C.H. Scholar. He started at 19 as an assistant; has been in child care for 10 years. Parents rave about Mr. Jason. One parent currently has two of his triplets in Mr. Jason’s class.

Champion for Men and Children Award

Jerry Parr – Member-at-Large Jerry Parr continues to work with fellow co-founders of MenTeach New England, a coalition of male and female teachers and administrators who support men in early childhood education in the U.S. states of Maine, New Hampshire, Vermont, Massachusetts, Connecticut, and Rhode Island. Jerry has been including MECE initiatives in his proposals for designation and renewal competitions by Head Start grantees. His company, Willow Tree Early Education Team, LLC, has set up a small MECE scholarship and recently helped finance MenTeach New England’s annual reception at the Massachusetts AEYC Spring Conference on Friday, April 19, 2013. The event experienced an unfortunate overlap with the unprecedented lockdown and manhunt by law enforcement officers for the Boston Marathon bombers. This led to an unanticipated but valuable collaborative event with their colleagues of the Mass AEYC. The recipient of one of the several awards in support of MECE, Dr. Ed Klugman, had to negotiate deserted streets with his adult daughter to make their way to the event.

Leader of Men and Children Award goes to a man that works directly with children and has made significant contribution to furthering the efforts to increase the number of men working with children.

Champion for Men and Children Award goes to a man or woman that has made significant contribution to furthering our efforts to increase the number of men working with children. The recipient does not work directly with children.