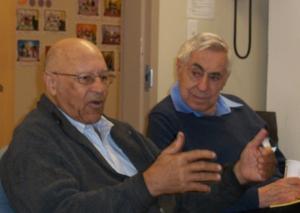 On the first Saturday in October MenTeach-New England held its Fall meeting in the Boston inner city Neighborhood of Mattapan, MA. Clarence Little provided was host as director of the Grove Hall Child Development Center and almost 20 people attended.

People came from as far away as Springfield and Northampton, MA and from Hanover and Londonerry, New Hampshire. We had two elder (at least older then me) early childhood people: Walter Little (father of Clarence in photo on left) a community activist and founder of Grove Hall CD and Ed Klugman (in photo on right) – Professor Emeritus at Wheelock College and well know expert on play in early childhood. Both provided depth and experience to our discussion.

Ed taught us some German drinking songs from his youth. Walter talked about early Boston child care (and some stories about Malcom X in Boston). We had both new and old members and a lively discussion about being in the field. Many of the members are fathers and talked about what it was like in reaching out to fathers at their early childhood settings. We had a transgendered man who participated and helped us with new perspectives for widening our perspective. It was also exciting to have a woman ally attend in support of our work.

There was lots of energy spured by discussions. Ed Klugman and others are excited about collecting stories of men in a long term project to push our agenda gender equity among the teachers in the education of young children. We are looking forward for more men of color in participating in our group and some have already signed up for speaking and organizing.

This was an exciting day and we look forward to reaching out for more men from throughout New England for getting involved.