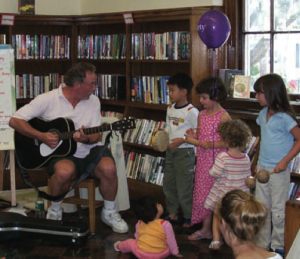 Jim St. Clair is being awarded the second Steve Shuman Award in support of Men in early education and care for his longtime commitment in the field of Early Education and Care.

By his success and shear devotion to helping young children he has shown that men too can make a difference and has been an inspiration to men in the field. Since that start of his career he has shown that men are more than just a source of fun or an outlet for play but also advocates for a well rounded, quality early education for all, not just those who can afford it.

Since his start in 1970, Jim has moved around the ranks from teacher, head teacher, and lead teacher to director and college instructor. Through his actions and devotion he has shown that men can make a difference in the lives of children of all ages and this is why we honor him today. kindergarten teacher for the Cambridge Public Schools since 1985 to the present. He presently works at the Esculea Amigos School in Cambridgeport, MA.

This is what was one of the written comments by Joe Petner:

I have known Jim for nearly 35 years. In fact, we almost lost Jim to the field of early childhood education during the era of Proposition two and a half. I remember having a conversation a couple of years after he was a casualty of the massive teacher layoffs and working at Boston University running the world language lab that he really belonged back in the classroom with his five year olds.

He did return to the classroom and my only regret is that I didn’t get to hire him to teach at my school. What is extraordinary about Jim has everything to do with the quality of his teaching as well as the caring and passion he brings to his classroom and efforts as a teacher.

I have watched him with children and families. Jim embodies the best of all the qualities that makes for an outstanding educator. His true love, deep interest, and total commitment to children and their families are the hallmarks of his reputation and speak to the exemplary teaching he displays daily. Jim is a dynamic and vibrant teacher whose classroom is a place where students are engaged intellectually, their curiosities about learning nourished, and who exhibit an enthusiasm about school, their teacher, and each other. Jim organizes his classroom curriculum in a thematic way and has developed units of study that integrate all aspects of the curriculum and offer a variety of experiences and materials to assist the children in their learning.

From my perspective, Jim’s classroom is no less than a “magical kingdom” where everyone’s ideas, talents, and abilities are valued. Jim St Clair is a teacher of extraordinary talent and skill. His contributions to the Cambridge Public Schools and the profession are inspiring and of great consequence. The consequence of his work is for me reflected in this poem.

Jim, thank you and congratulations!