on April 8th, 2007 Posted By BG in Reports
by Dr. Sarah Farquhar - www.childforum.com 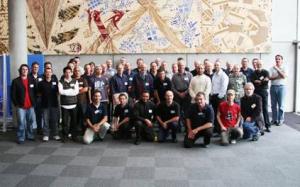 On 29th March an extraordinary event in education – a Summit on Men in Early Child Care and Teaching – was held in Christchurch. It was probably the first time that men outnumbered women at an early childhood meeting – and what a different atmosphere it was. Above is a photo from the event – a guys only shot.

Did you know that men now represent just less than 1% of the staff in teacher-staffed services? (Including kindergartens, childcare centres and home-based education coordinators). Parent-staffed services, like playcentres and kohanga reo are not so gendered.

The scarcity of males was highlighted by one male teacher from Gisborne who discovered at the Summit that there weren’t other males working in centres in his region.

If you are a woman in teaching, remember that kiwi men can nurture and care for young children and encourage the men you know to consider early childhood teaching as a career. Gender diversity is needed in our profession. Unfortunately men only see women working in early childhood services, and think there is no place for men. But men as well as women should have the wonderful opportunity to work with young children. Children need to have contact with men in their lives, especially in the early years. We can be telling men that:

“It is cool to be a man in early child care and teaching”.

Teacher-staffed early childhood services need to catch up with social change. Today more fathers engage in active parenting and almost all traditionally gendered occupations have changed or are changing to become more gender inclusive (with the exception of early childhood teaching and midwifery perhaps).

The downward trend in male participation rates in early childhood work has been known for at least a decade now, since research on male teacher’s experiences and views by Dr Sarah Farquhar was first published, and subsequent writings on practices of no-touch and sexism (go to www.childforum.com publications page for details of papers/reports). Support for the participation of men in early childhood care and teaching has not been shown in the language of education policy, education policy itself, and practices within teacher education and the sector (but wonderfully this all now looks set to change – let’s hope. See the end of this article)

The Childforum Research Network organised Men’s Summit served an important political purpose to generate interest in, and support for, getting more men into teaching and to provide a forum for male teachers and students from across the country to meet.

A package of materials including papers from the Summit will be put together and made available online at www.childforum.com by late May. If you would like to contribute a letter, message, article or your thoughts on the topic of male participation and representation in parent-staffed and teacher-staffed services please email your piece as soon as possible to sarah@childforum.com

As a result of the Summit, regional networks are being formed for male students and teachers working within early childhood services to stay-in-touch and provide support. If you are a male teacher working in a centre or home-based setting, email your contact details to the coordinator, Peter Visser p.visser@paradise.net.nz

The Summit received support from across the Sector. Principal sponsor was the Early Childhood Council, along with the NZ Kindergartens Inc. PORSE, and the Father and Child Society.

Many politicians were invited and nearly all declined or did not reply to their personal invite, including education and opposition education spokespeople. We were thrilled to receive support from Judy Turner M.P. (deputy leader of United Future) who attended. It was heartening to have Dr. Judy McGregor (Human Rights Commission), Lynley Hood (author), and Nicola Atwool (office of the Children’s Commissioner) participate in the Summit along with representatives from the Ministry of Education and TeachNZ, Barnardos, University of Canterbury, University of Victoria in Wellington, Open Polytechnic of NZ, Te Tari Puna ora o Aotearoa, AUT, University of Auckland, ERO, NZEI Te Riu Roa and Vision College.

Planning for the Summit came on the back of a report released last year on Sexism in Early Childhood Teaching and a TVNZ Sunday documentary. The Early Childhood Council picked up on the urgent need to open early childhood teaching to men and made “men in early childhood” the theme of their national conference. The Summit was held the day prior to the ECC conference to enable the issues, concerns and the voices of male teachers to be heard before the conference and before a top-level meeting of sector leaders. At the Conference the Minister of Education gave a clear signal that he supported the idea of men working in the sector. The ECC hosted the top-level meeting to discuss developing a national strategy for getting more men into the sector.

“Those attending the workshop came from the three main parts of the early childhood sector: Government including the Ministry of Education and Chair of Parliament’s Education and Science Select Committee Hon Brian Donnelly; senior teacher educators including those from the universities of Auckland and Canterbury; and leaders from service delivery organizations such as the Kindergartens, Kohanga Reo, the New Zealand Childcare Association and the Early Childhood Council. The workshop devised an outline plan for getting more men working in the early childhood education sector and committed to developing a more detailed plan in the coming months” (ECC Council press release).