on March 27th, 2012 Posted By BG in Reports
by Adam Buckingham - President EC-MENZ 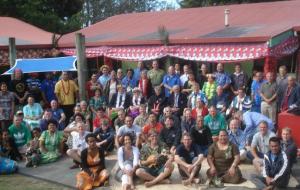 From 16th -18th March, 2012 another extraordinary event in education – The 6th Summit on Men in Early childhood: EC-MENZ (Men in Early Childhood Network of New Zealand) was hosted in Whanganui by Born & Raised Pasifika Early Childhood Centre and generously supported by some of the wider Whanganui business community.

Well done Whanganui for hosting such a marvellous conference. Over the weekend we feasted like kings on a fantastic array of food, entertainment, guest speakers, and workshops. The grand opening and all the entertainment was very colourful, following the Pasifika theme of the weekend.

The workshops gave us the opportunity to learn skills and crafts from making quilts to Ei Katu (head dress), the art of making tapa and fans, upeti (pattern boards), mobiles using natural resources, tracks and puzzles. We enjoyed music with nga rakau (rhythm sticks) and ukelele, and created a fountain with paua, and not forgetting my favourite – the foot massage! Thank you to Born to be Raised whanau and staff for sharing your cultural history and identity with us to take home and share with our children.

From Dunedin to Kaitaia early childhood men and women journeyed to Whanganui to share our stories, to network and support each other as men working in early childhood education. Once again the low rates of male participation in early childhood education in New Zealand was a concern discussed. Those at the ECMENZ AGM acknowledged the work that has taken place to raise the profile of men in the ECE profession and shared some of the success stories happening nationwide. A decision was made that the new committee would create a strategic plan to build on this work.

Only 2% of the early childhood teacher workforce in teacher-led, Government-funded New Zealand ECE services is male. Researchers suggest an increase in numbers of men would add male perspectives to children’s education; teach boys that nurturing is a male disposition; encourage more fathers to take part in the education of their young children; provide valuable encounters with safe and caring males for mothers who have had negative experiences of men; and help resolve teacher shortages.

Some Comments from attendees:
“Awesome.” “Inspirational.” “Fun.” “Educational and entertaining…” “I am unpacking head ei katu, cushion covers, x-ray film, fans, fabric and more unusual conference taonga.” “Thanks born and raised pasifika and ECMenz.” “What a great weekend, so much food, fun and laughter.” “Saturday night was a fab and Brilliant” “Loved it all!” “Well done Born and raised Pasifica”

So, yes we can say Whanganui was well worth the journey.
Till next time, enjoy your amazing teaching positions and keep jamming the vibe of being a man in ECE.
EC-MENZ organised Men’s Summit served an important political purpose to generate interest in, and support for, getting more men into teaching and to provide a forum for male teachers and students from across the country to meet. For more about Men in Early Childhood and to become a member Look at ecmenz.org and on Facebook.