Men Gather Every Year at Retreat to Learn and Play

This is an article about how to develop and coordinate a retreat for men teachers. IN THE MORNING, in a circle on the floor, the men recite a series of children’s rhymes. Later, in the afternoon, they go outside for a rough-and-tumble game of broomball. The action resembles other winter games men play in northern […]

The focus on men’s roles in Norway’s gender equality debate still generates some resistance. Men are commonly perceived as the strong and dominating gender while women tend to be viewed in terms of generations of discrimination and the ensuing need for special measures and positive actions. This perspective has been fundamental to the achievement of […]

This article is a narrative of how things went for me during my recent deployment to the Disaster Recovery Center (DRC) in Fort Walton Beach, Florida, and the Red Cross Center in Pensacola. A second report will comment on matters only of concern to Disaster Child Care. I arrived in Pensacola on Monday, September 11, […] 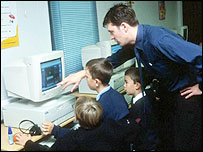 Call for male primary teachers A drive to recruit more male primary teachers in England is being launched by the Training and Development Agency for Schools. The TDA is trying to redress the gender imbalance in the profession at primary school level. It has carried out research which suggests 83% of parents would like to […]

This article was first published in the Young Children November 2002. It offers a description of an annual Men in Education Retreat. Attachment Size MensRetreatYC 83.68 KB