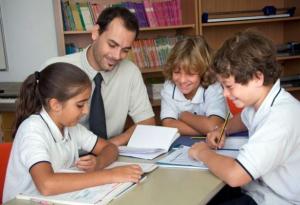 Almost one million primary school pupils are taught in schools without a male teacher – fuelling concern for the performance of boys in the classroom.

Headteachers argue that the lack of male role models, particularly for boys from single-parent homes brought up by just their mother, can send a signal to boys about the importance attached to their education.

The figures, published today, show that more than one in four schools do not have a registered male teacher on their staff. There are only two men under the age of 25 working in state nursery schools in the whole country.

The figures, published by the General Teaching Council (GTC) for England, have also fuelled fears that men are being put off applying for jobs because they fear they might be accused of being a paedophile.

“It is absolutely essential that primary schools and indeed early years centres have men working in them,” said Mick Brookes, general secretary of the National Association of Head Teachers. “It is particularly important where there are large numbers of children from single-parent families where there is no male role model at home.”

However, he added: “One of the reasons they are put off is the assumption that, if you’re a male working in a primary school, there is a fair chance you will be accused of something some time or other. This is because, sadly, there are some people who clearly shouldn’t be working with children and, sadly, they generally happen to be males.”

The numbers of men teaching in primary schools have fallen this year by 100 to 25,491 – just 13 per cent of the total number. This is despite a campaign to encourage more men into the profession. In nursery schools, their numbers have fallen from 56 to 43. Last year’s overall recruitment figures showed the percentage of males was at its lowest level for five years.

A study
carried out for the Training and Development Agency, which is responsible for training teachers, said that boys performed better in education if they have a male teacher in their primary school. The study of more than 1,000 men revealed that almost half (48 per cent) cited male primary teachers as having the most impact on them during their school life. In addition, 35 per cent said male primary school teachers had challenged them to work harder at school.

It is the first time in the seven-year history of teaching force statistics that the numbers have been broken down school by school. Overall, just 25 per cent of all teachers are male. However, in secondary schools recruitment is increasing, up by just over 4,000 to bring the total number to 123,827 or just under 25 per cent.

Keith Bartley, chief executive of the GTC, said: “If men do not believe that teaching is a worthwhile career option for them, or worse still, if their interest in teaching is viewed with suspicion, then children potentially miss out on a huge pool of talent.”

* Headteacher vacancies have been left unfilled at more than one in four primary and special schools in the past year. Twenty-one per cent of all vacancies in secondary schools have remained unfilled.