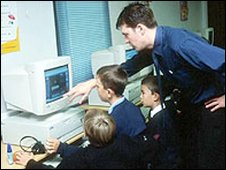 The number of men applying for teacher training has risen sharply because of the recession, says the body responsible for training teachers.

Redundancies in the City have prompted the change, says the Training and Development Agency for Schools (TDA).

The number of applicants to teach maths and modern languages has also risen.

Increasing status
Traditionally in primary schools there has been a ratio of four female teachers to every male.

But rising unemployment has made the prospect of teaching five to 11-year-olds more attractive, according to the TDA.

TDA chief executive Graham Holley said: “Teaching is a profession with increasing status that is becoming more and more competitive.

“There has been a sharp rise in applications to teacher training from people working in other professions.

“They recognise that teaching can fulfil their ambitions, provide challenges, and offer rewards such as a competitive salary and great opportunities for career progression.”

The TDA is hosting an event in London on Friday to encourage people to become teachers, with Schools Secretary Ed Balls expected to attend.