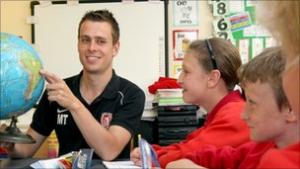 Wales has three times as many women teachers as their male counterparts and the gap is growing, says the General Teaching Council for Wales (GTCW).

The GTCW said the situation was worse at primary level where women teachers outnumber men by more than five-to-one.

Women now make up 55% of headteachers in Wales, but mainly in the primary sector, and are still under-represented in the secondary sector, the GTCW said.

However, there has been a rise in Welsh male graduates opting for teaching.

The latest GTCW figures show the gap between male and female teacher numbers in Wales has been growing each year for the past four years.

But the GTCW said commentators could see redundancies in industries such as banking leading to a rise in male recruits in education.

The council said figures from the university recruitment service Ucas showed a 58% rise in Welsh male graduates opting for teaching, with 360 applying for a teaching course in February 2010, against the previous figure of 226.

The latest figures follow concern from GTCW at the end of last year that male teacher numbers were at a five-year low. The number of male primary teachers in Wales in December 2009 was 2,140, compared to 11,807 women.

He said: “It’s important that there are male teachers in primary school classrooms.

“Children need a mixture of influences and opinions, especially because they may not live with both parents.

“Teaching a broad range of subjects always appealed more to me, rather than getting stuck with one.”

The GTCW’s latest figures also show that the number of female head teachers is rising and becoming more representative of the gender profile of the teaching profession in Wales.

Four years ago there were roughly equal proportions of male and female head teachers even though women made up three-quarters of the teaching workforce.

The GTCW figures show a consistent upward trend in the proportion of women heads. However in the secondary sector, only 26% of heads are women.

GTCW chief executive Gary Brace said: “The widening gap in numbers between male and female teachers is concerning, particularly in the primary sector where the imbalance is greatest.

“It’s important that the profession is able to provide good role models for both boys and girls and we hope that efforts to persuade more men to consider teaching as a career are successful.”

Mr Brace welcomed the continuing rise in the proportion of female head teachers.

The GTCW register covers a total of 38,896 teachers in Wales.

The Welsh Assembly Government has been asked to comment.