on April 2nd, 2014 Posted By BG in World News
by Nicole Chettle for the Midday Report 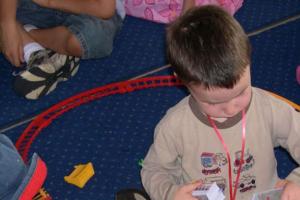 Climbing the corporate ladder can be tough, especially if you’re a woman, but there are an increasing number of men finding it hard to break into traditionally female-dominated professions.

There’s vigorous debate about whether there should be quotas to boost their numbers on boards and, as advocates continue to seek a fair go for females, what happens to men in jobs dominated by women?

The Australian College of Midwives estimates that less than 1 per cent of midwives are men.

Martin Griffiths is one of them. He works in Sydney’s north, and has been doing this for 20 years – ‘catching’ 620 babies and helping thousands of pregnant women.

For the record, midwife means “with woman”, so there’s no need for a more gender-specific title.

Still, being a man in what’s long been considered a woman’s job requires sensitivity.

“For men going into a women’s health environment, you definitely have to be aware that you are a minority, and that you have to have a positive impact in that environment,” Mr Griffiths said.

“I just don’t think that you can treat it as any old job.”

Sometimes women are surprised to meet him. Martin Griffiths says it generally takes “about two minutes” to win their confidence.

However, he says the rewards are immense.

“It’s just magical. I think just being part of new families, being part of that miracle of pregnancy and birth, I know it sounds a cliche but really it’s quite a special time,” he explained.

“And to be there at that time is quite a profound thing really.”

Martin Griffiths helped bring Erika Coombe’s son Thomas into the world. So, when she fell pregnant for a second time, she had no hesitation asking Martin to be involved.

“We desperately wanted to have Martin a second time and, if we have more children, we’ll definitely want to have him again,” she said.

“So you move beyond what sex your midwife is as such. It’s really irrelevant.”

Childcare is another area where men are few and far between.

However, for 20-year-old Andrew Bavaro and 21-year-old James Wall, working with little people at the Oz Education centre in suburban Sydney is both a privilege and a joy.

It’s also a job where strong male role models are in short supply.

“I think it’s important for the kids because a lot of the children come from single mother homes,” Mr Bavaro said.

“I think childcare was a good option because obviously I love kids,” Mr Wall added.

“I couldn’t really see myself doing an office job or something like that, so this is an obvious choice.”

While women try to smash the ‘glass ceiling’, men are more likely to ride the ‘glass escalator’, being promoted to a management or administrative role away from the hands-one position they signed up for.

Doctor Isabel Metz is an expert on gender and careers at the Melbourne Business School.

She says men are being discriminated against but, unlike their female colleagues, this type of discrimination can actually advance their careers.

The problem is it could also take them to a place they never intended to go.

“Contrary to what is happening to women in corporate where it’s called a glass ceiling and women cannot move up, here this kind of discrimination is called a glass escalator,” she explained.

“Whether they like it or not, they are moved into more ‘legitimate’ positions within these female-dominated professions,” Doctor Metz said.

Martin Griffiths says he has never been tempted to move out of midwifery into an administrative role, but he acknowledges negative stereotypes are rife.

“I think men are nurturing. I think they are caring people, and they’ve been seen as feminine qualities in the past,” he said.

“But I think in the 21st century men can claim those qualities as well, and they can claim them in parenthood, in their families, and in their professions as well.”

Dr Metz says that even in more traditional roles, men are missing out.

Corporate high flyers are reluctant to ask for family-friendly hours for fear the boss with question their commitment.

The challenge ahead seems to be proving that caring and nurturing is not just ‘women’s business’, at home or on the job.