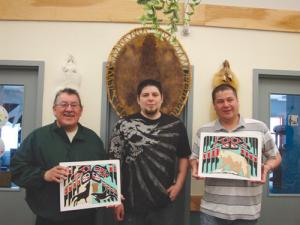 Gaining a new perspective on early childhood education was the goal of three Peguis men who visited a small British Columbia community in early February.

“They get a lot of their food from the ocean and land,” said Cook. “They don’t always have to buy everything and no one goes hungry there. If an elder wishes for some kind of fish, someone younger will go to the ocean to catch it. The fish will be cooked and on the elder’s table the next day. They’re always looking out for each other as a whole. In Peguis everyone is looking out for themselves.”

Cook says the cost of living is higher in Klemtu than Peguis.

“In Peguis we take a lot of things for granted,” said Cook. “Here we throw away our extra food, when they keep everything to help feed others. If the food’s no good, they give it to the dog. Nothing’s wasted.”

Cook says he learned how the local culture adapted through history.

“I learned how the different tribes came together,” said Cook. “When the missionaries first got there, they told the people to gather all their art, totem poles and everything about their culture, put it in a pile in the middle of the village and burn it. So they started over again as one band, which was interesting.”

Mindy Sinclair, program coordinator for the Head Start and Daycare, says Cook was part of the first all male group to take part in an exchange.

Sinclair says FNIH sponsors three people per trip, but more staff, parents or elders can attend if they pay their own expenses.

“The programs involved are required to have up-to-date travel and transportation insurance,” said Sinclair. “The communities which apply must have their community leadership letter specifying the community is behind the Head Start program participating. The program that applies agrees to arrange and make plans for the staff coming for the visit. In this case, Peguis is hosting K’Lempu, B.C. in March.”

Sinclair says visiting groups are expected to take part in regular program activities, ask questions and learn from the other program by being hands-on for a week, then share what they learned when they return.

“Each program involved agrees to share as much of their best practices as they can,” said Sinclair. “One best practices from Peguis is the amount of men who are currently working as early childhood educators in the early childhood education programs in our community. The idea behind these exchanges is we can all learn so much from one another. As well, the friendships and partnerships that continue after the exchange is finished can have long lasting benefits.”

MEN IN CHILDCARE AROUND 25 PERCENT

“There are many reasons for this that I need to delve into to increase my understanding,” said Sinclair. “My research tells me men in ECE in the mainstream are represented at about two per cent of staff. In Peguis it’s more like 25 per cent if we include our substitutes. As the program coordinator for Peguis Head Start/Daycare I believe in the active involvement of recruiting more men into ECE and that Peguis has succeeded more than others.”

“When new parents come to the daycare, they expect a granny in a rocking chair,” said Cook. “It’s a shock for them when they see me walking around and playing with the kids. There aren’t many men in childcare and I wish they knew what they were missing out on. Every man has an inner child they’re trying to let out and children love it when you act like a child and play with them.”

Cook said he started working as a substitute for the money, until he fell in love with the kids.

“When I started working with the kids, my inner child came out and it was really fun,” said Cook. “I started thinking about all the stuff I didn’t have when I was growing up and I brought it to the table for them for learning experiences.”

“Children interact with their caregivers eight to 10 hours a day,” said Sinclair. “When those children interact in a healthy learning environment, such as daycare and Head Start, they’re interacting with both sexes. They see Richard Daniels, our bus driver from Head Start who’s also an early childhood educator, bend down to their level and hold out his very large hand as he helps them off or on the bus. Or they see JR Olson at the daycare everyday, who, when he walks into a room all the toddlers scream in delight, ‘Jr! Jr! Jr!’ or the tears when JR leaves the room. What JR has is truly magic — the love for children and the love that’s given back to him.”