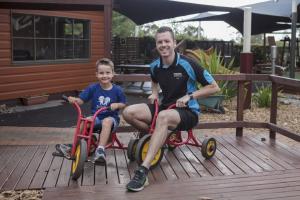 Blake Stewart is slowly starting to shift perceptions about men working in childcare.

In the process the 24-year-old has become a positive role model for many children from St Luke’s Preschool in Dapto.

But it hasn’t been easy for Mr Stewart, who received a bit of backlash from parents and other workers at the start of his career.

Only about five per cent of early childhood educators are male and Mr Stewart could sense some initial trepidation from parents during his first work placement.

”Overcoming that I just came to realise that they were just unaware of what benefits males bring to the sector,” he said.

”I made a conscious effort to be as professional and accountable to centre staff, educators and parents alike….to take away that stigma of men being in early childhood education.”

Mr Stewart has worked in the early childhood industry for the past four years.

Most of that time has been at St Luke’s Preschool, where he recently accepted a position as a full-time teacher.

”The parents have been fantastic and very supportive,” he said.

”I had to draw a professional line but the experience sparked an advocacy in me (for male early childhood educators) that flowed through my entire four-year degree.”

But within weeks of studying early childhood education at TAFE NSW Illawarra campus, Mr Stewart found his real calling and he was hooked.

”I found the first five years of a child’s life are the most crucial time for learning and development; I realised that I had a passion for this,” he said.

”Two weeks into my degree and I was completely committed to it.

Mr Stewart was so inspired by his experience, he harbours plans to mentor future TAFE NSW students in partnership with the degree.