on August 23rd, 2012 Posted By BG in World News
by Prakash Sharma 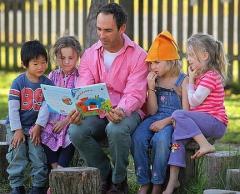 While most men think of joining industries where they can flourish and secure their future, this young man chose for childcare. No wonder, he was the single male member amongst a group of 100 females studying the concept at TAFE and university in Newcastle.

During the initial years of his career, this man, Craig d’Arcy, had to face major hurdles, as a majority of the parents was unwilling to male carers getting closer to their infants or children. Childcare centre boss, where Craig started off with his career, informed him that the parents specially mentioned in their enrolment form that they do not want any male workers to come in contact with their offspring.

Almost after 20 years, now d’Arcy is serving as the founder of national Males in Early Childhood Network Group. During all these years, he has come across several centres and organizations, which do not allow male carers to go near the infants, as majority of people believe that male workers are either gay or have wrong intentions.

“The stereotype is that men are predators who are looking for opportunities to abuse young children. There seems to be that automatic assumption”, says d’Arcy, Co-ordinator of Mullumbimby preschool.