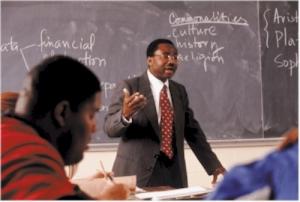 Minister of Education and Human Resource Development, Ronald Jones, made this admission yesterday, while saying that more men were applying to teach.

He told reporters females were doing their best in the classroom but there were certain things males were better suited to do to help schoolboys – and even girls.

“I still think that there is still a need to have more men coming forward to the front,” he told reporters during a tour of schools yesterday.

“The (male-female) ratios are still low, too low for my own comfort. The presence of a male and female within a mixed co-educational environment is important to the mental and emotional state of young people and where we can have a little more of men coming forward will start to give a better feel within the classroom environment.”

He argued that there were things that young boys wanted to talk to men about “and they should have that opportunity to talk to men within the school environment” about such.

But through games, including cricket and road tennis, men had roles in “helping to make young men become assertive within the school environment and the wider world”, he added.

It was all well and good to speak about “my mother who fathered me” but “we want fathers to father”, he told reporters.