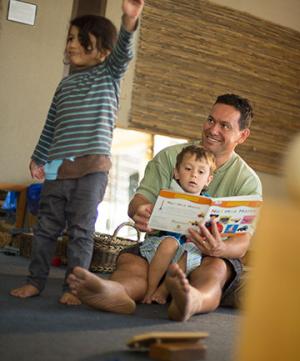 On a scale of All Black to astronaut, “kindergarten teacher” is unlikely to make the cut on most Kiwi boys’ dream career wishlists.

In New Zealand, early childhood education is traditionally a female-dominated sector where men make up just 2 per cent of the workforce, according to Child Forum.

This comes as no surprise to Joseph Pomana – long accustomed to being mistaken for just another “dad” at the Palmerston North kindergarten where he works.

Pomana, a reliever teacher at Roslyn Kindergarten, is one of two men in a pool of about 200 early childhood teachers working in the Ruahine Kindergarten Association’s centres – and he loves his job.

“Kids are just brutally honest. Basically anything they say or do comes straight from the heart and there’s no half-measures with them. When they are happy they are delirious; when they are sad they are just heart-broken.”

Pomara is a rarity in more ways than one. After he and his wife, Brenda, started their family, she went back to work and he stayed at home with their three daughters.

He called their situation “lucky”. When the children went to school, Pomana took a job at Highbury’s teen parenting unit, Nga Rito o te Puawaitanga, where he worked predominantly with young solo mothers. That experience gave him some insight into what he could offer young children as a childcare worker.

“There’s a lot of kids out there with solo parents and they don’t have much contact with their dads. Sometimes it could be good for them to interact with a male role model just for that balance.”

That is one of the reasons lobby group Child Forum is pushing for more men to enter the early childhood education (ECE) sector. A survey of 800 people undertaken last year with EC Menz, a group for men working in the sector, found public support for introducing more men into childcare, with 96 per cent of respondents agreeing there was a need for greater access to male role models in early years childcare.

It was rare to see more than one male student in each year’s intake at Massey University, associate professor of Early Years Education Dr Claire McLachlan said. The reasons men did not get into the early childhood sector were varied. There was less opportunity for pay or career progression compared to other education jobs such as secondary school teaching.

There are also more nefarious reasons that may cause men to shy away from the profession.

“I think men get a reasonably hard time when they go into the early childhood workplace. They are treated with a degree of suspicion and have to prove themselves more than women do.”

Men in all areas of education worked hard to ensure they did not put themselves or children in vulnerable situations, Pomana said.

“It’s always in the back of your mind. It is a reasonable fear and all you can do is make sure you are safe in your practice in the workplace.”

“I think it’s very brave but also quite insightful of them. It’s quite rare to have men in our association but they went for it and I think for them it is extremely rewarding. It would take a pretty strong person to break with tradition.”

Child Forum is working to help more men into early childcare careers. The group is calling for education providers to sponsor male student teachers and, under a new initiative, men accepted into training may be awarded a grant or scholarship to assist their studies.