on March 12th, 2010 Posted By BG in World News
by Anushka Asthana - Guardian/Observer 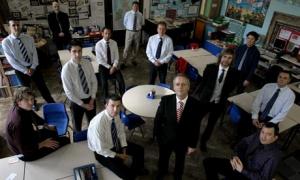 Thousands of bankers, IT workers, PR executives and journalists are turning to teaching, figures show today. The recession has made private sector workers think again about their working lives, with 13,500 “career changers” applying to train as teachers in the past year, a 35% rise. In all there was a 117% rise in inquiries from those looking to change jobs.

Many cited job security and satisfaction as the reasons and were surprised that their salaries would not suffer as much as they expected.

Graham Holley, chief executive of the Training and Development Agency for Schools (TDA), which has released the figures, said the influx of career changers – along with a rise in applications from top-level graduates – had made it increasingly difficult to enter the teaching profession. “As a result it is becoming more and more competitive. It is no longer just a safe job that is all right for a fall-back,” the agency stated. “More of the most talented people in this country are turning to it as their first choice.”

Most inquiries came from people working in IT, followed by banking and finance and then media, communication and entertainment. Among those who have made the switch are Angela Adebayo, 39, from London, who left banking to become a maths teacher, and Roberto Lavorini, 36, from Ashton-under-Lyne in Greater Manchester, who started in September as a primary school teacher after a career as a criminal solicitor.

Simon Moore, 48, from Orpington in Kent, who left a successful career at ITV Sport, says that the skills he learned in television will be invaluable.

“Going into a school full of teenagers was scary, but as you get to know them they are actually fantastic,” said Andy Yule, 40, who left his job as an IT consultant to become a teacher. “My form group, who I looked after from when they started to when they finished, feel like my own kids.”

Yule has no plans to go back to the City. “One of the best things about the job is that you’re constantly learning. Here there are loads of areas to develop, take a risk and try something new and learn. I work very hard in term time, but the holidays are a big bonus.”

The TDA is launching a major recruitment drive, with three Train to Teach events in Manchester, London and Birmingham. Registrations for this weekend’s event in the capital were up 28%. A campaign to increase the number of men in primary schools has resulted in a 52% rise in applications.

In spite of this, TDA research shows that the public perception of teaching remains poor. Two-thirds of graduates believe it offers slow career progression, while 80% of final-year students underestimate the salaries that can be earned. More than a quarter of students thought the starting wage for a teacher in central London would be 19,000 pounds or less, yet new teachers can expect to start at 26,000 pounds – more than 6,000 pounds above the national average and better paid than engineering and architecture.

When people were asked to rank teaching in terms of career progression, it was beaten only by journalism and human resources.

Holley said: “There is a danger that outdated and old-fashioned perceptions of teaching could continue to put off some candidates. Teaching offers more opportunities for career progression than any other career, and competitive salaries, particularly for those who progress to senior leadership.