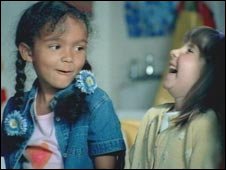 Men are being urged to take jobs in nurseries after a survey suggested many parents want their toddlers to have more contact with male role models.

For every 100 people working in childcare, only two are men.

The Children’s Workforce Development Council questioned 1,000 parents about the issue of men working in nurseries.

Single mothers appear to be particularly concerned, with 66% saying they would like a man to be involved in their child’s development.

However, of the parents questioned, 59% said there was not a single man employed at the nursery to which they sent their child.

The survey suggests 17% of children have fewer than two hours of contact time per week with a male adult, and 39% have less than six hours a week.

Just over half of those surveyed, 57%, said they believed men and women had different skills to offer young children in their care.

Currently around 3,000 men work in early years childcare – about 2% of the workforce.

The CWDC is calling for more men to consider working in early years settings. They say it is crucial for children under the age of five to have contact with a responsible male adult.

“Male workers will get to work in a challenging, stimulating environment with like-minded professionals dedicated to the development of children – with positive benefits to babies, toddlers and young children to families and communities,” he said.

“Traditionally, it’s not been seen as a job for men, and we need to challenge that.

“The rewards and job satisfaction reported in early years childcare is very high for both women and men,” he added.

However, campaign group the Daycare Trust, said it was unlikely many more men would be attracted to the career until wages were improved in the sector.

Tricia Pritchard from the union Voice – which represents nursery nurses and other childcare and education staff across the UK – said children needed male as well as female role models.

“And at nursery and in school – because of the predominantly female workforce – they aren’t getting a male role model there either.

“However, unless more is done to improve the pay, working conditions, training, career development and status of nursery staff, I fear that men – and, increasingly, women – will not be attracted to childcare as a profession.

“The problem is self-perpetuating – as children go through nurseries with predominantly female staff, they’ve grown up perceiving it as a female profession, so when young men come to choose their own career, they don’t tend to think of childcare because they see it as ‘female.'”