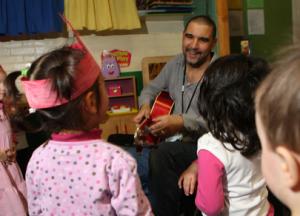 There are the same little wooden cubbyholes, small jackets and frayed scarves hanging from hooks that you find in any child-care centre.

The same book corner and tiny plastic couch. The same miniature chairs around miniature round tables.

What’s most striking about Beatty Buddies Daycare is the men.

Men like Geoffrey Brown, stuffed into a toddler chair and quietly overseeing 3-year-old Adelaide glue silver snowflakes onto paper. And Shane Scott, all 200 pounds rising off the floor where he has been playing castle with a group of toddlers, to address a fight between Liam and Nate.

“Keep your body to yourself, please,” Scott tells them. Shaved head, tattooed wrist, hulky figure – Scott would fit in as a bouncer on Richmond St. But he prefers separating – and teaching – children.

Go to a graduation ceremony at George Brown College and you’ll see 92 per cent of the early childhood education diplomas are handed to women. The four-year degrees are even worse: 98 per cent of the graduates are female.

Beatty Buddies is an exception. One-third of the staff here are men.

I visited twice to see them in action. It convinced me every childcare should have male workers – both for the kids and for their mothers. Male childcare workers, I think, are the answer to much unfinished feminist business.

Lisa Winters, the centre’s managing director, lays out the obvious differences between male childcare givers and female ones. They play more physically. They lift kids up to see things on the wall. They bring out a football in the yard, rather than heading to the monkey bars.

“They think of things women generally wouldn’t put in the program,” she says, pointing to the hockey net and goalie gear in the room’s drama corner.

The patriarch of the clan, Donovan Wilton, has worked here for 15 years. He is a professional musician. During his circle time, he plays Rolling Stones and Beatles songs on his guitar for the kids to bounce and race around to.

How important all this is becomes painfully clear when they all sit back down.

They are only four years old. But already, they separate themselves – girls in dresses, sparkly shoes and a pink tutu to one side, boys in sloppy shirts and sneakers to the other.

“You often see boys sitting in a circle, rolling their eyes around and looking off at the sky,” Winters says. “Look at how engaged they are here. Boys are like puppies. They have to be playing and moving.”

The Toronto District School Board is looking at ways to boost boys’ achievement in grade schools. Why not start earlier – at daycare?

After the initial shock of seeing men in a child-care centre, the most obvious thing is how little they differ from their female coworkers. They set out crafts, serve meals, read stories, cuddle away tears, change diapers.

That, I think, is even more powerful.

These men are breaking the steadfast stereotypes that bubble up on Statistics Canada reports: no matter how women flood law and medical schools, we are the nurturers and homemakers.

Years down the road, will Liam’s wife thank his parents for sending him to a place where he learned – by osmosis – that men clean up and push strollers? I’m betting yes.

“It makes you wonder if it was a male-dominated profession, would we see more investment in it?” says Christine Nunez, managing director of the Atkinson Foundation, whose son Gabriel went to Beatty Buddies.

That’s a good question too.

Other pink professional ghettos, like nursing and stewardessing (remember that word?), became purple after they unionized, says Judy Rebick, former president of the National Action Committee on the Status of Women. Unions brought higher wages, which lured men.

Child-care workers make on average $30,000 a year, $26,000 less than the average elementary school teacher in Ontario. That’s a clear deterrent to anyone, men or women.

There’s something to be said about critical mass, too. The more men who become caregivers, the more likely the men in Parliament are likely to take the field seriously.

Winters didn’t set out to recruit male caregivers. She simply hired the best, she says. They drew one another, finding comfort in some shared hockey talk amid all the girlie chatter.

But maybe there should be a concerted effort to get more men into the field. The European Union has set a target of 20 per cent male child-care workers by 2015. Why don’t we?

“In the early days of feminism, we wanted to be like men. That was a mistake,” says Rebick, now a professor of social justice and democracy at Ryerson University. “What’s needed in the world is what women are stereotypically good at: more loving, more compassionate, more nurturing…

“If men spend more time with children, they’d be more like that,” she says.