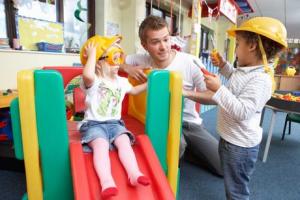 The Government should do more to encourage boys and men to work in the childcare sector, according to a new briefing by the Fatherhood Institute.

The document calls on the Government to require careers advisers to actively promote childcare jobs to boys and men, while supporting girls and women in choosing careers that are not traditionally considered ‘female’.

The institute adds that the exclusion of men and boys from careers in the childcare sector is contributing to the gender pay gap in the UK.

The institute’s joint chief executive Adrienne Burgess said, ‘We believe it is vital that careers guidance programmes begin to appreciate and promote the substantial career opportunities available to boys and men in childcare and related professions.

‘The benefits would be enormous: a more diverse workforce benefiting clients, the status of “caring” raised, caring better paid and no longer seen as ‘women’s work’ and more dads feeling comfortable engaging with their children and with services.’

The paper, which responds to the Government’s follow-up inquiry into careers guidance for young people, argues that professional childcare is often defined as ‘women’s work’, which allows both genders to view caring as a role for women and to accept the idea that it is something that women ‘do better’ or that comes ‘more naturally’ to them.

The majority of mothers, the paper suggests, therefore pursue the ‘mummy track’ of relatively low-paid part-time work, which has a direct impact on women’s earnings and national productivity and drives the gender pay gap.

The briefing argues that if men were to be more involved in caring for young children, ‘the status of childcare, remuneration for it and therefore quality of provision would likely increase’.

It says that career guidance professionals should ‘examine their own prejudices’ and promote the childcare sector to boys and men in order to repair the gender imbalance.

Careers officers, teachers, employment services, employers, training bodies and family information services should make a positive case for men to work more with young children, including an emphasis on how young children would benefit from more men looking after them professionally, it says.

The institute also proposes an ‘Inspiring Men’ campaign to bring male volunteers into schools to talk about non-traditional job roles, balancing work with childcare and being an involved father.

It also calls for the Government’s Speakers for Schools initiative, which currently sends leading industry professionals and academics into state secondary schools and colleges to share their experiences, and which recently marked its 1000th school talk, does not focus enough on non-traditional occupations.