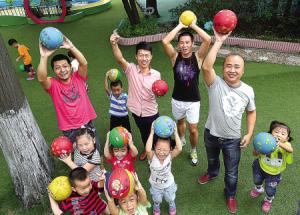 Yang Linyun is among 100 male students who were recruited and subsidized by the government in south China’s Guangxi Zhuang Autonomous Region to be trained as preschool teachers.

Before going to work in Guangxi’s kindergartens in two years time, Yang and his fellow male freshmen stood in huge contrast to a number of girls on enrolment day at Guangxi College for Preschool Education in Nanning, capital of Guangxi, earlier this month.

Yang applied for the course because he thinks he has strong communication skills, is great with kids, and most of all, it will not cost him anything as all his expenses are covered by the Guangxi regional government.

“In kindergartens, female teachers make up the majority, which means there is a better chance for me to find a good job after graduation,” said Yang, who is from Leye County in Guangxi.

The male students do not care whether others look down upon them for choosing to be “male aunties”, in what is a substantially female sphere in China.

The program was announced by Guangxi’s education department in June. Students will get two years of free training, then have to work in Guangxi’s preschools for at least six years.

The program has attracted many poverty-stricken students from rural areas. Once recruited by the college, the students are exempt from tuition fees and accommodation costs. In addition, they are eligible for subsidies, scholarships and grants.

Only one in every 300 kindergarten teachers in Guangxi is a man. Guangxi educational authorities hope the program — the first of its kind in the region — will alleviate a lack of preschool teachers in general, and male teachers in particular.

Parents and education experts alike are concerned that the preponderance of female teachers in kindergartens is not good for children’s personal development.

Kindergartens may well have a strong demand for male preschool teachers, but the fact remains that the number of qualified male teachers is far from enough in China.

Zhang Wenjun, dean of education department, said the Guangxi College for Preschool Education has already compiled a training schedule for the students, and they will have no trouble finding a decent job after graduation.

“In addition to the traditional curriculum, the training will also include physical education, teaching skills and art courses, which are specially designed for male students,” Zhang said.

Zhang believes that male teachers bring something to preschool education which might otherwise be lacking, including different physical abilities, attitudes and thinking patterns compared to their female colleagues. A more balanced set role models should help children grow in a healthier way.

Zhou Hao, member of the Chinese People’s Political Consultative Conference in Guangxi, feels that young students will lack masculine traits due to the lack of male influence around them.

“Preschool children go through an imitation stage, and outside influence is very important, so there is a need for a masculine side to education to help them cultivate a well-rounded character,” Zhou said.

There is no quick fix for the imbalance between male and female teachers in China’s preschools. No regulations state any requirement on teacher sex ratios.