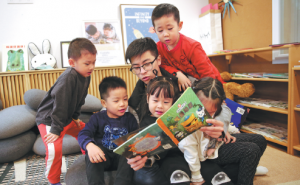 When Yu Zehong started teaching at a kindergarten in Beijing in 2018, some parents asked to transfer their children to other classes.

The parents did not have a good impression of male teachers. Some were worried because of news reports about male staff members sexually assaulting children, while others thought a man would be too strict with the young students, Yu said.

“They did not know what they would get from a male teacher, because there are so few of us,” the 24-year-old said, noting that only two of the 30 teachers at the kindergarten are men.

“However, I have spent two years with the children at the kindergarten, and most of the parents have told me they would not trust anyone else to take care of their kids. Some students in my class would be devastated if I were sick and absent for several days.”

Male kindergarten teachers are important for children’s early education, he said: “Our voices, gestures and, most of all, our way of thinking are different from female teachers. While women are considered careful in looking after the kids, male teachers can be more creative and energetic.”

Instead of establishing conventional student-teacher relationships, male teachers are more like playmates to the children, he said.

He added that men are more likely to help the students become independent as they often encourage them to stand up on their own after a fall, unlike most female teachers who almost immediately offer a helping hand and comforting words.

Despite the advantages, though, there is still a lack of male teachers.

In 2018, only about 2 percent of the more than 2.58 million kindergarten teachers in China were men, the lowest proportion at all levels of school, according to the Ministry of Education.

The lower the grade, the smaller the number of male teachers.

At primary schools, male teachers accounted for around 32 percent of all teachers in 2018, while the figure was 43 percent at middle schools. High schools recorded 46 percent and universities had 49 percent, ministry data shows.

Chu Zhaohui, a senior researcher with the National Institute of Education Sciences, said the gender imbalance among teachers in kindergartens and primary schools may result in serious social consequences. That’s because education is critical to character formation during early life and the lack of male teachers has seen large numbers of boys growing up shy and timid.

He noted that the typical family environment in China also plays a role as fathers are still expected to bring home the bacon, while mothers are often the parental figures who raise the children. Furthermore, as most children in the current generation are their family’s only child, they tend to lead very sheltered lives.

With their masculinity and thought processes, male teachers provide a different approach to teaching, and the distinct methods employed by male and female teachers help provide children with a holistic learning experience, he added.

Tian Li, a kindergarten teacher at Huijia Kids Education in Guiyang in the southwestern province of Guizhou, said unsatisfactory pay, low social status and limited career prospects are the main reasons why there are so few male teachers in primary schools and kindergartens.

“Some people think a kindergarten teacher is a nanny and they would not accept a university graduate becoming a nanny, especially a man,” he said.

He noted that the education sector has always been a female domain, so there is a social stigma that men who work in preschools are effeminate.

Also, males in this female-dominated field tend to feel depressed and somewhat lonely and want a sense of belonging.

“When I first joined the kindergarten team, many parents were curious and some were even skeptical as to whether I would be a good teacher,” Tian said.

Male kindergarten teachers generally can’t help but feel dissatisfied with the job because they don’t see the same career prospects as teachers in high schools or universities, who can get bonuses, promotion and tenure status, he said.

When Gu Jie began teaching at the Brilliant International School in Beijing’s Dongcheng district in 2018, he was the only male teacher. Two years later, the situation hasn’t changed.

“I didn’t think too much about it. My major at college was early childhood education, so it was natural for me to become a kindergarten teacher after graduation,” he said.

He added that the job requires a lot of patience and love for children, but their big smiles and seeing them learn more things every day are reward enough.

“They have a lot of energy and they don’t always know how to properly release it,” he said.

“Something physical happens: They trip over someone, they accidentally hit someone, it escalates, then it becomes ‘he did this and he did that.’ Then it becomes a shouting or crying match.”

It is not easy to be a kindergarten teacher. They must be able to sing, dance, play musical instruments, draw pictures, tell stories, break up fights, comfort children and teach them about language, society, science, health and the arts.

Xing Miaomiao, head of Gu’s kindergarten, said she wants to hire more male teachers. She believes that it is vitally important for younger boys to experience men in caring, nurturing roles if they are to grow into the kind of adults society needs. Also, male teachers can have a positive effect on girls’ expectations of the men in their lives.

It is important to have a diverse workforce with a range of interactive styles, interests and approaches to teaching to ensure the children are receiving a rounded education, she said.

The preschool period is a crucial time for personality formation, so it is particularly helpful to have active male role models for young boys, Xing said.

Because fathers are often absent from the family, male teachers can play some of those masculine roles, which is good for the development of children’s personalities, she added.

However, she said it is difficult to hire male teachers, mainly because of the low pay.

As society often still views men as the breadwinners, it is not easy to support one’s family on a kindergarten teacher’s salary, especially for male teachers in big cities.

They said they chose the job not for the money, but for the joy of spending time with the children.

Still, some male teachers have switched careers after just a few years because of the low income and high pressure of work, said Yu, who is preparing to open an art education training center with his girlfriend.

“With the experience of teaching in a kindergarten, I can better understand the needs of students and parents and how to get along with them,” he added.

Gu said he has been preparing for exams and interviews that will allow him to work at a public primary school.

“I like spending time with my students, but I cannot earn this little money forever.”