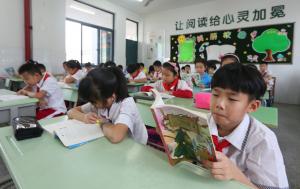 This is news to no one — women really do have to work harder than men in order to receive equal treatment and opportunity in the workplace. The disparity is particularly pronounced in primary education in China, where schools and government officials are exhibiting an increasingly apparent preference for male candidates while recruiting teachers. This seems to be based on the belief that there is an overabundance of female educators in this field, which is why Chinese boys are supposedly having a “masculinity crisis.”

Case in point: To address this gender imbalance in its latest hiring of primary school teachers, education authorities in Changsha, Hunan Province, recently decided to lower recruitment standards for male applicants to an unprecedented level, where a man only needed to score 4 out of 100 in a written test to be considered. When called out for its sexual double standards, the Changsha Education Bureau tried to rationalize the practice by saying that there’s an urgent need for male educators to teach effeminate boys to man up.

According to the Wuhan Morning Post (in Chinese), the controversy unfolded earlier this week when internet users discovered a list of candidates who are currently considered for available teaching positions in Changsha’s Gaocheng District. Published on the Bureau’s website, the document (in Chinese) shows a total of 588 people who have been selected for face-to-face interviews after taking the initial written test.

Although male candidates generally scored lower than their female counterparts, they still managed to secure about 200 spots on the list. It’s not surprising considering that the Bureau, despite stating in its recruitment plan that it wanted to ensure fair competition, actually ranked male and female candidates separately for most positions in the process, with the goal to fulfill a gender quota.

What’s really shocking, though, is the standards required of male teachers-to-be. In one extreme case, the Bureau allowed a man who scored 4 in the test to get into the next round, while female candidates competing for the same position had to achieve an average of 90 to have the same opportunity.

As screenshots of the list started to make the rounds on social media, many internet users were outraged by the preferential treatment received by the male candidates. “Apparently, having a p*nis is worth like 96 points for that man,” a Weibo user commented (in Chinese), while others suggested that making an exception for someone who’s clearly not qualified to be a teacher is irresponsible for students and their parents. “It would worry me a lot if my kid’s teacher was that bad at tests,” a person wrote (in Chinese).

However, the pushback did not make the Bureau rethink its employment policies. On Wednesday, it defended its preference for male candidates in a statement, saying that they were desperately needed to reinforce traditional gender roles in the classroom and address a decline of manliness among some school-age boys who were found to be “too effeminate.” The Bureau also assured the public that not all the male candidates on the list would become teachers, since they still had to pass interviews and complete trial periods while interning at schools.

This controversy surrounding the Bureau’s preferential hiring treatment has emerged at a time when there’s a common belief among government officials in China that the nation’s overprotected teenage boys are becoming physically and emotionally weak, leaving China with a “crisis of masculinity.”

In a plan issued earlier this year, the country’s education authorities outlined fitness- and health-related measures to enhance young boys’ “masculine energy.” While the plan didn’t include any policies designed to increase the number of male teachers, it approvingly cited a proposal from a local government official, in which he said that the prevalence of female teachers in kindergartens and elementary schools had made boys display “unmasculine qualities,” such as weakness, timidness, and low self-esteem.