on September 21st, 2017 Posted By BG in World News
by Jane Gilmore - The Sydney Morning Herald 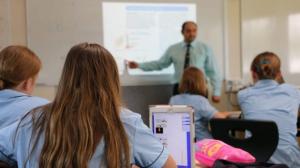 Men are becoming a token presence in our children’s schools. In 2016 fewer than one in five primary school teachers were men and if the current rate of decline continues male teachers will be extinct by 2050.

Tim Clark taught English and media in Melbourne for three years immediately after leaving university. After a break of six years he went back to teaching but left again four years later.

He said his reasons for leaving were personal as much as professional.

“Stress-related breakdown, frustration with bureaucracy, lack of support from leadership, demanding parents, poor training and no self-care were the things that drove me away from teaching,” he said. “When teachers don’t look after themselves, it’s invariably the students who end up paying for it.”

Campbell Rhodes agreed. He trained as a secondary school teacher in Canberra but decided against teaching as a career, citing the lack of support and demands on his time outside work. He now has a successful career in the arts.

No one has conducted any robust investigations into why men particularly are leaving teaching at such high rates. The stress and overload mentioned by men like Mr Clark and Mr Rhodes are not just felt by male teachers.

One highly experienced female teacher from Melbourne said she was just barely hanging on as the end of the year approaches.

“I’m just exhausted,” she said. “I can’t tell if it really is getting worse or if it’s just that I’ve been doing it too long, but I don’t know if I can go back next year.”

While this distress is felt by male and female teachers alike, a report last month in the Economics of Education Review showed the steady decline in the proportion of male teachers.

In 1977 men were 28 per cent of Australian primary school teachers. In 2016 they were only 18 per cent. The proportion of men teaching in secondary schools dropped from 53 percent to 29 per cent over the same period.

Catholic schools showed a minimal increase in male primary school teachers but were still lower than the national average. The independent sector had similar declines but showed the highest proportion of male teachers in both primary and secondary schools.

The report highlighted that none of the school sectors have developed any policies to attract or maintain male teachers. It presented two possible explanations but was also clear that more investigation is needed to understand why men are leaving teaching at such disproportionately high rates.

One factor could be that students have the same educational outcomes regardless of the gender of their teacher, so schools have no economic or professional incentive to push for more male teachers.

The other possibility is the social stigma of advocating for more men in teaching when women face greater adversity in employment more generally. This is particularly sensitive when men still comprise more than half the executives in schools despite having such low representation at the teaching level.

Children learn more than just academic subjects at school. It’s also their first experience of the wider world outside the family home and they learn a great deal from the people they interact with at school. Particularly for vulnerable children who may not have fathers at home, good male teachers can be a strong source of reassurance.

As the report said, “for the sake of students and teachers alike, urgent policy action must be taken to engage men in the education of our youth”.