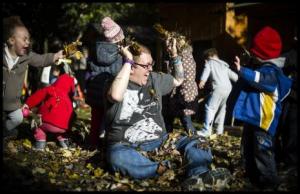 Was it fortuitous or bad timing that we launched the London Network of Men in Childcare amid the Jimmy Savile scandal, not to mention the misguided Philip Schofield/David Cameron television interview and the Newsnight debacle? Ironically perhaps, we actually chose November 19 for the London Network launch because it was International Men’s Day! Either way, mishandling of the child abuse scandal has been wholly unhelpful, since it has unlocked some incredibly ignorant thinking about men working with children – including comments from too many of those who should know better, affirming and embedding some pretty negative mind-sets and a mob mentality.

Worst of all (but unfortunately not unsurprisingly), we have many people assuming that an allegation is sufficient proof of a charge of abuse. Have they forgotten that in this country the rule of law declares you are innocent until proven guilty? This week the call to ignore this basic human right has been staggering, though sadly very familiar to men working with children who almost inevitably have to prove their innocence once an allegation is made. Surely the point of a police force is to find evidence to support an allegation before charging a person, and for a judge or jury to then decide on their innocence or guilt. It is this very process that ensures well-founded allegations are distinguishable from the false variety. This is the law and the rights of all men.

The journey to this apparently simple conclusion began with us taking advice from our own male staff. They told us they wanted to work in childcare because they were interested in child development and education, liked children and enjoyed the team spirit of working in a nursery. We learned a great deal from our male staff about the support they needed from colleagues, but also from management, to feel protected when or if they face unpleasant comments, allegations or negative parental responses. We then talked to parents, and heard how staff deal with the anxieties of fathers about men looking after their daughters, especially parents from more macho cultures. We considered issues such as isolation and how it feels to be a trophy staff member, and changed induction and recruitment policies to try and make sure we addressed these, including placing two men together in a nursery rather than spreading them thinly across more settings, and where possible giving a male apprentice a male mentor.

Previous research (what there was of it) identified the main barrier to entry as negative stereotypical attitudes, assuming that men who worked with children were more likely to be paedophiles. Our research confirmed this. We found that 60.7% of staff said they felt the main reason for low numbers of men in the sector was because men were not encouraged to join the profession by others, whilst 51.8% believed it was because of society’s attitude toward men in childcare. By contrast, when considering the benefits of men working in childcare, 75% believed it was very important for men to be seen as nurturing and sensitive role models, whilst 66% felt they could change society’s attitudes towards men working with children.

We also asked children (23) aged 4 what type of activities enjoyed most with male staff. It was interesting that the only time children commented about staff gender was in reference to very common examples of society’s gender-stereotyping, for instance the colour pink and wearing of jewellery.

We know that most people assume men will be better at football, rough and tumble and other similarly physical games, and so we should expect to see children showing a preferences for male staff in those areas. Not at all! Our research Men in Childcare: Does it matter to children? What do they say? in fact found children predominantly preferred to play football and rough and tumble games with women. They did not seek men out to play construction or trains, and chose men and women equally to cook with. Superhero play, on the other hand, confirmed research findings as an activity where men could bring something special, with almost all the children in the research project choosing to carry out this particular activity with a man.

Worryingly, children saw reading and singing as a female activity, with the majority choosing female staff for such activities. Challenging this view is critical, given the worrying data about boys’ literacy skills and the continuing negative attitude that reading is for girls only! Unless men provide positive gender-modelling in literacy, boys attending the nursery – particularly those who do not have male reading role-models at home – will continue to see reading and literacy as done only by girls and women. Considering future success in education is so often predicated on competence in literacy, failing to address will almost guarantee failure for a great many young boys.

As a result, a greater attention given to the role of men supporting children’s literacy – particularly boys – presents an exciting opportunity to devise new ways of working with fathers; helping to raise awareness of how  important it is for them to read with their sons and being seen reading for pleasure. Again, this needs to be linked to broader strategies aimed at  developing parent engagement and extending ways of enriching the home learning environment.

So the London Network of Men in Childcare has a number of things to do:

Ultimately, I hope, the outcome will be a more gender-balanced workforce that listens to children.

So come on – let London lead the way!