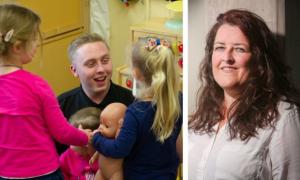 Councillor Lynne Short has called on council officers to ramp up efforts to recruit a greater number of men into the city’s nurseries.

Official figures from the Scottish Social Services Council, which manages Scotland’s early years workforce, shows just 2% of it is male.

The rates vary from as much as 8% of creche staff being male to as little as 1% working in playgroups.

Ms Short, who brought up her 18-year-old son Max solo, believes youngsters could be missing out on necessary male influences as a result.

“Can you imagine the reaction you’d get if it was women making up 2% of the workforce?” Ms Short said.

“My son is 18 now and for that whole time it’s only been him and I.

“From a father figure point of view I’ve been his only point of contact, and I’m sure I’m not alone in that.

“We need to encourage more young men to think about going into early years and childcare – they would be in demand.

“If we don’t start the conversation saying it’s okay for men to work in childcare they never will.”

The Maryfield councillor raised the issue at a council meeting on Monday night.

In response, children and family services boss Paul Clancy said the council wanted to encourage more men into childcare “as best they can”.

He added: “Education in general has become a female-dominated career.

“We’re working hard with Dundee and Angus College and schools to encourage the whole care sector as an employment opportunity for all young people.

“We have got some extra managers who are male coming through – it’s something we would like to encourage more of.”

Ms Robison said: “I was delighted to be invited to Balgillo Nursery last week to support Scottish Apprenticeship Week.

“Well done to Pamela and Kim at Balgillo Nursery for addressing the gender imbalance within this sector and showing that men and women can thrive in any profession they choose to pursue.

“I believe it would be beneficial for males currently within the sector, like John and Ryan, to speak at schools and colleges about their experience and show Early Years is a potential career path for young men.”