on May 9th, 2013 Posted By BG in World News
By Stacey Chia - The Straits Times 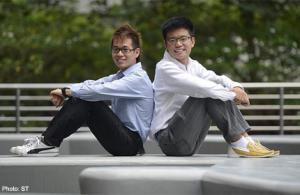 When Mr Bryant Goh tells people that he is studying to become a pre-school teacher, the most common response he gets is: “Isn’t it a job for women?”

His parents were also apprehensive and even offered to pay for his studies overseas, in related disciplines like psychology.

It took three years of bringing up early childhood theories over dinner and maintaining a high grade point average for his diploma in early childhood education to prove to them that it was not a spur of the moment decision.

Now, after graduating among the top of his class at Ngee Ann Polytechnic, the 24-year-old is moving on to further his studies in the field.

Mr Goh will be one of the first two male students to enter the Singapore Institute of Technology’s (SIT) early childhood degree programme, awarded by Wheelock College in Boston.

The school is still in the midst of completing its admission process for its second batch of about 40 students, whose lessons will start in July. SIT also offers other programmes with overseas institutions, mainly for polytechnic upgraders.

The sector currently faces a problem of attracting quality teachers due to low remuneration.

Pre-school teachers holding degrees are offered $2,400 to $2,600. In contrast, the latest university employment surveys show the average starting salary for graduates at $3,000.

For now, men still form a small percentage of the pre-school teaching force.

One of Singapore’s main childcare operators, NTUC First Campus, said that out of more than 1,600 teachers, only eight are male.

Over at Julia Gabriel Centre & Chiltern House, there are only 10 males out of their 150 preschool teachers.

Prof Craig said that bringing more men into the field will benefit children, as it is important for children to have both female and male role models.

“In many societies, the caring professions – pre-school, teaching, nursing and eldercare – were traditionally female because they were somehow thought of as an extension of women’s domestic roles,” said Prof Craig.

“They tend to use more kinesthetic teaching methods, like getting them to stand up and create shapes with their bodies,” she said.

But even if more men are willing to become pre-school teachers, some parents still do not like the idea.

Early childhood trainer, Mr Philip Koh, 50, who used to teach pre-schoolers and run his own private centre, said: “Many parents are still conservative, even though male teachers do not do the routine things like taking the kids for showers.”

Mr Koh said it is important for teachers male or female to “maintain a very open communication with parents” to prevent unnecessary disputes.

But Mr Joshua Loh, 21, who will start lessons at SIT next year after his national service, has yet to have an unpleasant run-in with a parent during his internships at various pre-school centres.

Said Mr Loh, who graduated with a diploma in child psychology and early education at Ngee Ann Polytechnic: “Children and parents shouldn’t have the mindset that only women can teach pre-schoolers; men can too.”

As for Mr Goh, he is looking forward to starting school in July. After graduating, he wants to pursue a masters in special education. “We play such an important role in determining how a child turns out in life, I’m glad to be part of it,” he said.