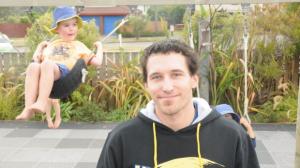 Dean Hodge comes to work with a smile on his face, every day.

The Ascot Park resident has been a teacher at Adventure Kindergarten in Whitby for more than two years and has just finished his diploma in teaching with Te Rito Maioha/Early Childhood New Zealand.

It is a relief to put the study behind him, but Hodge said the learning will never stop. He’s grateful for the support he had received since he came to Adventure, and at Ascot Park Kindergarten before that.

“It’s been three years [in early childhood training and teaching] now and I still love it,” he said. “The opportunities are limitless for me and seeing the kids every day makes me smile. They’re eager to learn and I’m eager to teach and you really feel like you’ve accomplished something at the end of each day. There’s a responsibility, because you have to be a role model for children who may not have father figures in their lives, but I love the challenge.”

Hodge, 29, was among the second group of “Y Men”, a programme run by He Whanau Maanaki o Tararua Free Kindergarten Association. It places interested young men into kindergartens for six months to see whether teaching is something they want to pursue.

Men are hugely under-represented in early childhood teaching but Hodge hoped the Y Men programme would help to turn the statistics around.

He said he had doubts at the start.

“I was hesitant to begin with, because I was shy and didn’t know what to expect. But at the end of my first day [at Ascot Park Kindergarten], I didn’t want to go home. Doing my studies was like being back to school and I wasn’t sure how I’d handle it, but it was fine.”

Hodge was one of three Porirua men to graduate recently. Another, John Wikitoa​, works at Nuanua Kindergarten in Cannons Creek.

He was on the unemployment benefit prior to deciding to give the Y Men programme a go. His success has encouraged others in his family to consider the possibility of teaching, or at least studying.