on October 22nd, 2015 Posted By BG in World News
By Mikaela Collins - The Northern Advocate 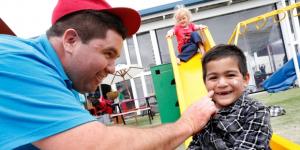 Whangarei’s Regan Reti was recently awarded a Ministry of Education Kupe Scholarship as one of the country’s top 30 Maori and Pasifika student teachers. He’s pictured with 4-year-old Durome Henry and 3-year-old Chloe Valentine.

There are few men in the field of early childhood education and Regan Reti is one of them – yet only four years ago the Whangarei man thought he’d be driving trucks forever.

Now the 33-year-old has been awarded one of the Ministry of Education’s prestigious Kupe Scholarships to celebrate the top 30 Maori and Pasifika student teachers around the country. And with men making up less than two per cent of teaching staff at teacher-led early childhood education (ECE) centres in Northland, he hoped he could motivate more to join the field.

But Mr Reti said he “accidently” fell into his role as a student teacher at Raumanga’s Christopher and Robin Early Childhood Centre, as only four years ago he was driving a truck delivering milk.

“My daughter used to go [to the centre] and I’d stay for a little while when I’d go to pick her up. Then, while I was still working as a truck driver, I would cover the lunch breaks for the teachers and then they offered me a fulltime job and I was really surprised.”

He’s been working there for three-and-a-half years and is in his second year of studying a Bachelor of Teaching through Te Rito Maioha Early Childhood New Zealand.

Mr Reti, of Te Kapotai, Ngapuhi and Ngatiwai descent, is a minority in his field of work. Out of 22 students in his class only three are males, which is actually “pretty good” he said.

He is also the only male teacher at his workplace.

“I’d like to motivate more men to get into this field because I see a lot of dads who come in and I know they’d be so good at this job,” Mr Reti said.

However, he said if you had told him five years ago he would be working in early childhood education, he would not have believed you.

“If you’d asked what I’d be doing five years ago I’d say ‘still driving a truck’.”

“I work on my studies from 10pm-3am because I don’t want to miss out on family time, so I wait till everyone is asleep.”