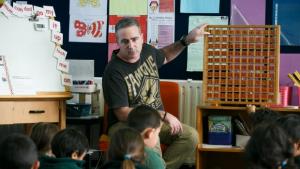 New Waikato primary teaching graduates are struggling to find work, with some schools seeing 100 applicants applying for the one job.

While Waikato high schools have the opposite problem – with trouble filling certain positions.

Teachers are being told they may need to be more flexible in where they live to secure a job, and many are having to start off in a fixed-term job to get to permanent one.

This is despite a decrease nationally in the number of graduate teachers.

Nationally, about 2200 primary and secondary teachers graduated in 2014 – a decrease of 10.9 per cent on the year before, according to the Ministry of Business, Innovation and Employment’s 2015 Occupation Outlook.

At the University of Waikato, a large teacher education provider, about 350 new teachers graduated in April.

That covers students in Hamilton, Tauranga and distance learners, but numbers were down on the usual.

Waikato graduate Rob Pulling finished studying in November 2014 and is still seeking a job in Hamilton.

“With so many people applying for one position your CV would have to be something quite special,” he said.

His aim is to teach at year five to six level, but said he’d do anything if it meant a job.

Some of the people he studied with were already looking for work in other industries, he said.

For many new teachers, fixed-term relieving was the path to a permanent job, University of Waikato associate dean of teacher education Bev Cooper said.

“It seems to be that’s what happens to new teachers now.”

She didn’t think there were too many graduates because of a range of influences – such as the aging teaching workforce – and said the Education Gazette had advertised more jobs this year.

Some students had a job before even finishing their qualification and new graduates had to be prepared to move to get their first position, she said.

Taumarunui principal Rikki Sheterline agreed about moving but said the first job was “a real challenge”.

Schools could get 100 to 120 applications for jobs advertised from term four on.

“How do you manage that? How do you decide who are the top 50 even, let alone the top five?” he said.

Other Waikato primary schools reported ads attracting from 40 to 100 applications in the past.

NZEI has criticised the Ministry of Education, saying more workforce planning was needed.

But the ministry said it closely monitored supply and had taken steps to help.

“The number of job ads has been climbing in recent years, and it is increasingly hard to recruit teachers in the sciences, maths, technology and Te Reo Maori,” she said.

Male teachers are fairly rare but it hasn’t helped a Waikato graduate so far.

Rob Pulling,39, finished his three-year teaching degree in November but hasn’t yet landed a full-time position yet.

The former builder and early childhood teacher has five young kids, so wants to stay in the Hamilton area.

“I applied for about five [jobs] … all the advertisements I looked at were for experienced teachers,” he said.

Ideally he’d like to teach at year five and six but “I’ll do anything if I can get a job here”.

He got an interview for a woodwork teaching job but was pipped at the post so he asked principals for feedback on his CV and hand-delivered it to about 10 Hamilton schools.

Now he’s launched into relieving work to beef up his work credentials.

“If I can get references from other principals… that might hold a bit more weight.”