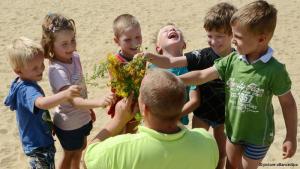 It is still an unusual picture: Karsten Röttjer, a 1.90 meters (6’3 inches) tall male, surrounded by young girls and boys. Physical education is on the schedule today. The children bustle around the kindergarten teacher. Physical education is always exciting for the children and with their new kindergarten teacher Röttjer it is even more fun. “I noticed that some of the kids are totally focused on me. Me being a man, the kids are much more boisterous than with a woman,” the studied social worker claimed.

Kindergarten teacher Röttjer: “The kids rampage around more with me than with female educators.”

The 40-year-old has worked in a day-care center in southern Cologne for five weeks now. He still needs to get used to the miniature world of small chairs, tables and a sink. But the work with the children is fun for him.

13 million euros for more men
That is the reason why the Ministry of Family Affairs started the initiative “More men for kindergarten.”The government and the European Social Fund are spending 13 million euros for it. Among other things the money goes into advertising – for example in Hamburg. Countless posters are dotted around the northern German city. In subways and elsewhere the posters try to persuade young men to become kindergarten teachers. “Diversity man” is romanticized on the posters: “Musician, magician, mediator, philosopher, goalkeeper, baker – be all, become a kindergarten teacher!” is the advertising slogan.

“We need to change the image of the profession,” said Pablo Andreae, who works for one of the 16 projects in Germany. Andreae together with Caritas tries to recruit more male kindergraten teachers by advertising at job fairs and at the so-called “Boys Day.”

Holger Brandes, professor for developmental psychology at the University of Applied Sciences in Dresden, also sees the need for a change of the image of the profession.

“The stereotypes are the biggest problem,” Brandes said. “For many, kindergarten teacher is not an occupation for men and it is not seen as a profession.”

Pedophile allegations discourage men
The very low salary and the prejudice against men who like to work with young children are reasons why many decide against the profession. Björn Bräunig from Krefeld had that experience. The 33-year-old father of three is currently completing training as a kindergarten teacher. He was repeatedly confronted with the prejudice that male kindergarten teachers are pedophiles. The assumption is never mentioned directly to him, but it always resonates, according to Bräunig.

“These prejudices make me really angry, but I don’t dwell on my anger,” he said. “I try to lead by example.”

Some critics doubt that there is a need for male kindergarten teachers. Others argue that the high ratio of women in kindergartens and primary schools results in boys not developing as well as girls. Basic research on this topic does not exist yet. The number of academic studies on the effects of the low ratio of men in early childhood education in Germany is still very low.

Men bring diversity in education
Brandes wants to close this knowledge gap. Mandated by the Ministry of Family Affairs, he studies the influence of the gender of the educator on children. “Men bring more diversity to education. Children benefit from this diversity,” Brandes said. It is not about stereotypical role models, it is just about men being around.

When you see how much fun the girls and boys have with kindergarten teacher Röttjer, you do not need academic proof. “My appearance is different from women and somehow the children want to cuddle more with me than with female kindergarten teachers,” said Röttjer. “It could be that it is just because of my height,” said the 1.90 meters tall man and laughs.