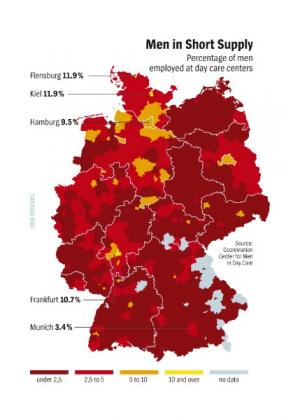 Generally speaking, gender equality in the U.S. and other Western countries has involved women moving into men’s spheres. We have not seen an equivalent migration of men into women’s spheres. Accordingly, while women have integrated many male occupations (they are now, for example, 50% or more of law and medical students), many female-dominated ones remain heavily female.

This is perhaps nowhere more true than in early childhood education. In a story about male childcare workers at Organizations, Occupations and Work, Lata Murti reports that only 5% of child care workers and 3% of pre-school teachers are male. Numbers are also low in other Western countries. In Germany, the average is 3.5% (and this includes all employees of child care centers, including custodians).

So, Spiegel Online reports, Germany has decided to try to do something about it. Aiming to increase the percentage of men in child care to 20%, the government is spending 13 million Euros on a “More Men in Early Childhood Education and Care” program.

The state isn’t doing this, though, solely out of a passion for gender equality or a soft place in their heart for men holding babies. They’re doing it because Germany has promised that there will be a spot in a day care center for all children when they turn one year old. To fulfill this promise, they need more day care workers badly; recruiting men means that that other half of the population might fill out the profession.
Lisa Wade is a professor of sociology at Occidental College and the co-author of Gender: Ideas, Interactions, Institutions. You can follow her on Twitter and Facebook.