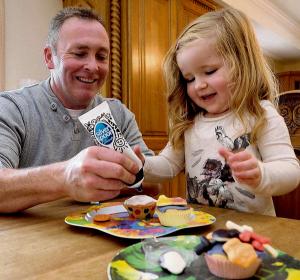 As a self-employed joiner, Co Down man Patrick Coulter used to spend his working life organising sub contractors and chasing clients for unpaid bills. Now he earns a wage from, among other duties, icing fairy cakes, putting plasters on knees and telling stories.

The 42-year-old is one of only two registered male childminders in Northern Ireland and he currently looks after a three-year-old girl, a seven-year-old boy and his own seven-year-old son in his home in Mayobridge, near Newry. In a couple of weeks he will add nappy changing to his daily tasks when he starts taking care of his youngest charge an eight-month-old baby girl.

“I am really looking forward to it,” he says. “She isn’t even crawling yet so I’m really going to get to see her develop, hopefully walking some time next year. I was telling her mother that I think it’s going to ignite so many memories of my own son as a baby . . . being around children is an adventure every day. It’s so fulfilling.”

Last week, the Northern Ireland Child Minding Association (NICMA) urged more men to consider the career, especially as there are increased numbers out of work and minding their own children at home due to the recession. Even allowing for a handful of husband-and-wife childminding teams, just 1.5 per cent of NICMA’s membership is made up of men.

“It would seem men worry about being viewed with suspicion if they set up as a childminder and some parents have strong reservations. It’s also the case that childcare is seen as low-status work and badly paid, but it can be a profitable self-employed business,” says NICMA director Bridget Nodder. She says men who have the right personal qualities can make brilliant childminders and provide a valuable male role model in children’s lives.

“Nobody questions the idea that fathers should play an active role in bringing up their children so why shouldn’t male childminders be accepted and valued?”

It’s a pertinent question and despite the prejudices, a small number of men are happy pursuing careers in childcare services. Coulter, who first started working with children three years ago through his local GAA club, is aware that some people find it strange. “But what can I do?” he asks. “I am not going to stop doing something that I enjoy and am good at . . . the way I see it, childminding is suited to certain characters, both male and female.”

Ireland has the lowest representation of male childcare workers in Europe, less than 1 per cent. According to Childminding Ireland, the national association for childminders, there is only one male registered childminder in the Republic. That man is Co Kerry-based Andrew Dineen, who has worked in the field for almost a decade.

Much more should be done, Dineen believes, to promote the importance of males in childminding so the stigma around men in childcare is reduced.

It was his parents who noticed he was a natural around children.

Encouraged by them, he trained as a Montessori teacher first and now works with special-needs children and runs a childminding service in the evenings catering for parents in Tralee who are students.

“I think because it’s still a new idea, people are a little sceptical,” he says remembering an incident from his first job where one of the parents didn’t want him involved in changing her child’s nappy. “At first I was a bit upset and wondered why the manager didn’t stick up for me more,” he says. “In fact, the parent came back the following week and said she didn’t have a problem with me being involved. Men go through all the same rigorous vetting procedures as women so there is no reason why we should not be changing nappies and doing all the other things that a female childcare worker does.”

Dineen is currently studying therapeutic play and his goal is to set up his own centre, incorporating some of the protocols he observed during six months working in Sweden where, for the first time in his career, he had male colleagues. “Except for in Sweden, I’ve been the only man on every course or job I’ve done,” he says. “I’m well used to being the only one by now but it would be great for loads of reasons if more men got involved.”

Why should more men be involved in childcare? “It’s important for the child to have a gender-balanced care setting, it’s good for their social development and hopefully they won’t subscribe to the stereotypical gender views most of us grew up with,” he says. He has noticed that the inclusion of men makes the childcare environment less intimidating for fathers. Many also believe children from families where the father is not at home can benefit from having a male role model in the childcare setting.

With the entire care sector from birth to old age largely dominated by women, Peter Moss, professor of early childhood provision at the Institute of Education University of London, says the issue is even bigger than simply providing male role models in the early childcare sector. He says Ireland and Britain face a “crisis of care” brought about by the fact that women have historically been expected to do most of the caring in society from the very young to the very old, a trend he says that is not sustainable.

“To tackle this we need more men showing and taking responsibility in all aspects of care services so children grow up to see both men and women are carers. We also need to show men that they are missing out on a whole field of potentially rewarding work. Most women who do care, even under rotten conditions, find the work rewarding.”

It is important, Moss says, to communicate the message to young children that caring is manly. “It’s about giving children access to a wider range of adults,” he says. “We should be showing children that there are many different ways of being men and women instead of dredging up the male role model idea all the time. Men don’t always want to be the person who is expected to kick the football and put the shelves up.”

He insists nothing will change until the issue is taken seriously at government level and points to Norway, where for decades there has been a national policy to increase the number of men working in services for children. “It needs to start with fathers taking more responsibility in the home for care of children and it has to be supported by a firm government commitment to look at the issue and to set specific targets for change . . . women have come so far in the past 50 years but in this area, men are lagging behind”.

There are no policies or targets in place here, although Minister of State for Equality, Integration and Human Rights Mary White recently met with the Men In Childcare (MIC) Network Ireland, a voluntary support organisation for men who work in the sector.

In a statement White said she supported the organisation’s “ambition to see more men involved in the provision of childcare”.

“We just want men to think about it as an option,” says MIC Network chairman Mick Kenny,who runs a childcare centre in Urlingford, Co Kilkenny. “There are a lot of stay-at-home dads now and they are involved in a voluntary capacity with youth clubs and sporting organisations. Childcare wouldn’t come into their heads but we want to tell them that it’s something they should consider,” he says. Kenny says while his gender allows him to bring a different perspective to his profession, he is “a childcare worker first and a man second”. Being a man in a woman’s world does pose problems. One man who wanted to remain anonymous has worked with children in the Dublin area for several years. In his experience, there are different rules for men and women, and the spectre of child abuse looms large, even though all child care workers are subject to the same vetting procedures.

“I’ve been told by different management and supervisors that I cannot hug the children in my care,” he says. “It’s very difficult when a small child comes to you and wraps their arms around your legs, and you have to unhook their hands as though from around the trunk of a tree. The child doesn’t understand why you are calling over a female staff member to take over; you move their hands away and all you see in their eyes is rejection.”

Andrew Dineen and the other men featured in this article did not report this experience. Dineen says that not hugging children who come looking for a hug is “unnatural”.

“Of course you have boundaries and policies but they are the same boundaries as for a female worker,” he says.

Most of the reports from male childminders are encouraging. Ten years ago, Tommy Banks started minding children when he had to give up farming because of a back injury. “It’s not just a woman’s job, there’s not half enough men in my opinion,” he says. “It’s good for children to see they can trust men to do this kind of work.” He was one of Sligo County Childcare Committee’s “champion childminders” last year after being nominated for the award by parents. He says he’d encourage any man who was interested to get involved. “Once you have been through all the checks and you are doing everything open and by the book, you have nothing to fear. It’s only a matter of time before people get used to you,” he says.