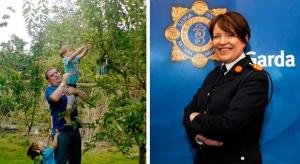 History was made this week, as Noirin O’Sullivan became the first woman ever appointed Garda Commissioner. This means the country’s top two justice jobs are now occupied by women. Is the move towards gender balance in the workplace finally getting under way?

According to Minister for Justice Frances Fitzgerald, much work still needs to be done. Speaking ahead of a conference on gender balance in business and leadership, which is hosted by her Department, the Minister said that steps need to be taken to ensure women are represented in leadership roles.

And things are moving forward, but at a slow pace. Sadhbh McCarthy, owner and director of the Centre for Irish and European Security, says that only a small proportion of her colleagues in the field of security and defence are female.

“Only 10pc of the people I regularly work with are women. It’s not uncommon to go to conferences where there are no women on the panel,” says McCarthy, who originally trained in computer science – and was the only woman on her course at the time.

She says that it can be difficult for women to get to the top in a male-dominated field.

“You are not going to be a senior woman in this business if you are not on the ball and well able to look after yourself. Even though I have women working for me in the office now, mentoring them through the process of making their voices heard can be difficult.”

In recent years, McCarthy has been working to address gender imbalance in her field.

“I co-founded a movement last year, where we drew up a list of women available to speak at conferences. We asked the men to sign a petition, agreeing that they would not be on a panel unless a woman was also present. It’s been effective. You need to have role models if you are in a career that is not traditional to your gender.”

Women in STEM-based (science, technology, engineering and mathematics) jobs have tended to be few and far between. According to civil engineer, Bronagh Lennon, maths and science need to be promoted to girls from a young age, if a balance is to be achieved.

“I think that girls need to be informed from the grassroots that engineering is a career option. My mother always encouraged me to work with jigsaws and puzzles and was very maths-based herself, so it depends on your influences.”

Lennon was short-listed for the Chartered Engineer of the Year award this year and currently works in engineering consultancy firm, Mott MacDonald. She says that her gender has never been an issue.

“The industry is very much project focused. If you work hard and get the job done you are respected, regardless of gender. I don’t feel the guys look at me any differently. If I make a mistake, they’ll tell me I’m an eejit and if I do well, they’ll say fair play. That’s the same for everyone.”

However, starting out on sites as a young female was daunting, admits Lennon.

“I found it difficult from a confidence point of view but I think that was more to do with youth than gender. In fact, the guys on the site would generally try to be on their best behaviour when I was around and make an effort not to curse in front of me.”

When Lennon attended college, there were only 10 women in her class of between 70 and 80 students. She feels that not much has changed since then.

“It’s difficult to say after the past five years, as there hasn’t been huge hiring. However, judging by the graduate CVs that come into us, I don’t see a huge difference in the number of female engineers.”

While progress for women in male-dominated fields may be slow, female-dominated industries have experienced a shift in recent years.

In 2012, the New York Times reported an increase in men entering careers such as nursing and teaching; citing money, quality of life and a gradual erosion of gender stereotypes as reasons behind the trend. Childcare worker, Mick Kenny, agrees that there has been a change since he began his career in 1996.

“I worked in childcare for about eight years before I came across another man. Things are different these days, especially after the recession, which I really think shook up gender stereotypes. People are more open to the idea now.”

Kenny says that he still remembers what is was like when he first started.

“Out of a class of around 18 of us in college and it was just me and one other guy,” he says. “At my first job, some of the parents’ jaws physically dropped when they saw me.”

Kenny now runs two community childcare centres in Kilkenny and is head of Men in Childcare Ireland, a support network for men looking to pursue a career in the field.

“Men who work in childcare are challenging stereotypes and it can only benefit society. Young children are so impressionable and are making decisions based on what they see. If they are only surrounded by women, when they grow up, they’ll believe it’s not a job a man can do. The more men that do it, the more people will accept it.”

Kenny says that while the job is rewarding, lack of funding means that men can be put off by the low salary.

“We have seen men having to leave due to money, as some centres can only pay minimum wage. Having said that, there are plenty of guys in it as long as I am. They know they are not going to become millionaires but they do it because they love it.”

Hairdressing has long been thought of as a career most common with women, yet salon owner, Aidan Fitzgerald, says that the industry now attracts a lot of men.

“When I started out 43 years ago, only about 20pc of hairdressers were men. Now, senior level hairdressing is made up of about 45pc to 50pc men. Hair is a big business and guys are seeing that these days.”

Fitzgerald started his hairdressing apprenticeship aged 15 and was the only male on the course. He opened his first salon aged 19 and his current premises in Blackrock has been thriving since 1991.

While Fitzgerald has forged a successful career for himself, his choice of job initially left his parents puzzled.

“I grew up in a family of 11. We were always competitive and we all had jobs. I never wanted to go to school and I always wanted to earn money but when I told my dad I was doing hairdressing, he was worried about what he would tell the others in the office. My mother couldn’t understand all my trendy haircuts,” Fitzgerald laughs.

Over the past few years, Fitzgerald has noticed that people have become more open-minded.

“I went through a phase a few years ago of calling myself a businessman – just to make life easier. Now, hairdressing is a big industry and people’s reactions are very different.”

When it comes to making it as a hairdresser, Fitzgerald says that gender is not important.”You are solely judged on your ability and skills in hairdressing. If you deliver the goods and look after the customer, you will succeed- regardless of gender.”