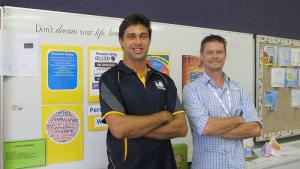 “It is challenging to be a minority group and it would be great to see more men in a primary setting,” says Broome Primary School’s Simon Zuvich who teaches physical education and literacy.

Figures from the WA Education Department show that 17.2 per cent of teachers in state primary schools are men, down from 19.9 per cent in 2013.

“It was one of the things I noticed, when I first started training to be a teacher, was the disparity between the amount of men in the room and the amount of women. But that’s also been the driving force for me,” says science and health teacher Jim Broughton from Broome Primary School.

“I’ve always firmly believed you need a better balance of men and women in education and it’s not because men do it any better as educators; we’re equally the same. But boys growing up in school can relate a bit better to men,” says Mr Broughton.

“And it’s good for girls to see men as educators.”

The pair both entered education to make a positive difference in the lives of children and they enjoy the challenges of day to day teaching and the intrinsic rewards it provides. But they’re keen to see the disparity between male and female teaching ratios changed.

“Some kids don’t get a male teacher until middle primary,” says Simon Zuvich.

The Education Department has a campaign called Males in Primary, which is a short video to encourage men to see teaching as a rewarding, varied and interesting career.

“It can be as simple as making a difference to one kid’s day. Seeing you’ve made a change to their life or you’ve been able to help them,” says Jim Broughton.

Elephant in the room

The Broome men have theories about the lack of male primary teachers including stigma that surrounds men working with children and that early childhood education is perceived as being a female role.

“We’ve got to remove this social stigma around men and children,” says Jim Broughton.

“Having most teachers as female particularly at a primary level sends a subtle but powerful message that education is feminine and that men in early education are potential abusers or deviants… It not only drives men out of the profession but it also stops them starting in the first place.”

“It is the elephant in the room,” agrees Simon Zuvich. “It’s a very sensitive thing to talk about. Acknowledging that it is a stigma or a stereotype.”

They’d like to see more strategies in university teaching courses for men, incentives to get men into the career, and more male role models within schools even a gender quota.

“Why would it be so weird to have a male kindergarten teacher?” Simon Zuvich asks.Go to website/Hear their interview.