on April 7th, 2015 Posted By BG in World News
by Lydia Gard - The Telegraph 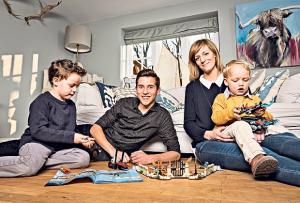 My husband recently moved abroad with work, returning on average for a week every month. We joke that he’s a tourist in the family, but it’s not always funny. I ploughed through the first few months juggling being a full-time mum to our two sons – school runs, play dates and winter viruses – and launching a magazine, before I collapsed into my gin one Friday night (OK, a Wednesday afternoon) and touted the idea of getting an au pair.

Being a graduate of the Old School, my other half, Dave, automatically assumed that I was proposing a sassy young girl should enter the family fold, the very thought of which moved him to start clearing the spare room cupboard. Naturally, I didn’t set him straight.

Why tree-climbing is good for children

And while the silhouettes of a thousand Swedish nannies queued up in his imagination, I diligently wrote a profile of our boisterous young family and posted it on the AuPair World website, ticking “male” in the search box.

A fortnight later we sat down on Skype to interview a responsible 19-year-old from Bavaria. Of course, I gave Dave a précis first: an eloquent, bright and creative candidate, with a clean driving licence, a passion for cooking and — did I mention? — an accomplished ballerino, too. (The subtlety of the suffix escaped him.)

I may have neglected to mention that Chris was a boy. To be fair to Dave, he recovered his composure and by the end of the call he was on board with the idea, albeit he didn’t like the idea of another man kissing the kids goodnight. But I didn’t want a replacement father, just an extra pair of hands: a “mau pair”.

In no way am I suggesting that men are “better” at childcare than women. Rather, I’m a pragmatist. And say what you will, hiring a boy to look after boys makes a lot of sense. However mature and sartorial Chris may be, he still knows in his bones that trees are for climbing, that Lego is holy, and that nothing delights a small boy like a tickle fight.

He is the poster child for mau pairs: he takes pride in demonstrating a decent flick-flack on the trampoline, enjoys performing the cup song in front of a crowd of star-struck toddlers, and is willing to spend a Saturday morning holding a belay line at the climbing wall without radiating ennui.

Given his age, he is less proxy-parent, more older brother – too young to develop a crush on and yet, crucially, old enough to drive and hold a decent conversation about world politics.

Our sons Oliver, six, and Rupert, three, are thrilled to have a “big boy” to mimic, impress and/or clamber on. The effect of having a positive male role model around when daddy is away is palpable – in their sudden willingness to pick up discarded clothes from the bathroom floor, or the newly established hierarchy: “If you don’t listen to mummy, I’ll tell Chris.”

I’m not the only mother who thinks it’s the way forward. Mannies and mau pairs are a growing trend among young families, particularly those with young boys.

Richard Barclay, a qualified male nanny for the past 14 years, noticed the demand and set up Manny Poppins, a childcare agency specialising in placing young men in families. “Initially hardly anyone applied for work, but now we receive more than 100 applications a week, of which I only take on a vetted few,” he says.

“From our experience, families want someone with high energy – that’s the key. It’s always the guys who are bubbly and energetic who get the jobs. It’s confidence over qualifications a lot of the time.”

So it’s little surprise that many of the mannies on Barclay’s books are former actors who have taught drama, or young men who have worked in rugby clubs and sports camps.

“Families come to me looking for someone outgoing, energetic and dynamic – the husbands work very long hours and only get home in time for bedtime stories. They don’t want someone to do the cleaning and cooking; they are there to tire the kids out in the park.”

I asked a client of Manny Poppins why she had sought a male nanny: “I find them to be more direct and straightforward,” she said. “Although previous female nannies had great relationships with the children, I find mannies less likely to be emotional over decisions, making communication between us a lot clearer and simpler. The relationships last longer and there are fewer problems along the way.”

For single mothers, the chance to provide a male role model is part of the childcare solution; for working mothers, it eases the instinctive fear of being replaced – anyone who has heard their child call another woman “mummy” has felt the sting.

But what about live-ins? “We hardly have any. I think people are a bit intimidated by it; it is still unusual,” says Barclay.

This was the common reaction at the rural school gates when I told people about Chris. Eyebrows were raised. Fathers snorted: “What sort of a guy wants to do that?” – a statement, not a question – while mothers wondered aloud if they would feel safe. “A man you don’t know in the house… Does he do bath time? Isn’t it a bit odd?”

No, it isn’t. Here is a young man who wants to learn another language while living rent free and is willing to muck in with a family instead of paying a small fortune to backpack before uni. His motivations are the same as every female au pair’s.

But if you don’t need regular childcare or don’t have space for an au pair, there is Role Models – a new London service providing bespoke childcare, based on your child’s interests. Your son wants to learn the guitar? Get a musician for the day. Sporty kids? Hire a tennis coach for the afternoon.

About 70 per cent of the company requests are for male role models to look after boys, says founder Hugo Shephard. “There is less stigma attached to young males looking after children. Let’s be honest, it’s loads more fun to play football with an eight-year-old than it is to work in a pub or do an admin job.”

Elle, a client of Role Models who lives in Berkshire with her nine-year-old son, says: “I feel females pamper boys and babify them. My son is at an age where he doesn’t need that any more. I want someone robust and firm, and a deep male voice provides authority. It doesn’t mean male childcarers are stricter – but in my experience, they’re no-nonsense.”

I’m pretty no-nonsense myself, and I know plenty of other women of that ilk. At the end of the day it comes down to finding the best candidate, the right personality fit for your children (and you) regardless of the gender – of the carer or the children.

My reasons for hiring a mau pair were, frankly, selfish. Living with a young man negates my big-sister reflex. I don’t feel obliged to lend him my clothes, discuss his love life or over-obligate myself emotionally as I am inclined to do with younger women. And I don’t have to put the bins out… (ducks, as feminist tomes are hurled at her).

1 Young men of Gen-Z are more empathetic than previous generations. A considerate, gentle young adult is a wondrous role model for high-octane boys.

2 Do you know the offside rule? If yes, are you willing to discuss it at length, frequently? (If you answered no, consider a manny.)

3 A mau pair is willing and able to build a Lego Death Star and then play with it. For hours.

4 If you have only one bathroom, you won’t have to queue while another woman washes her hair.

5 For the pure entertainment of watching fellow mothers at the school gate rumour-mongering about whether you and he are having a fling.

Lydia Gard is the editor of Mr Fox, a new online magazine for parents with boys (mrfoxmagazine.com)