on November 29th, 2016 Posted By BG in World News
by Joanne McDowell - The Conversation 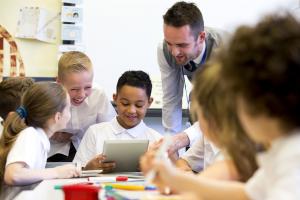 As it currently stands, less than 13% of the UK’s primary school teachers are male. A lot of this is down to the fact that primary teaching continues to be seen as a job only suitable for women. “Feminine” characteristics such as “caring” are seen as central to the role, and Western society mainly still envisions that it is only women – and not men – who possess such qualities.

So here lies part of the problem. While women have long been rightly told that they can be what they want to be – that they can enter into traditional “men’s work” – and to not let their gender prevent them from doing so, we have not seen the same push for men. Indeed, men who do enter into so-called “female” professions often report challenges to their masculinity. They are often labelled by society as “gay”, “unmanly”, or even as sexual predators.

This almost total absence of male teachers in many UK primary schools has led to the suggestion that girls continue to outperform boys in the classroom because of the “feminisation” of the teaching profession – which has provided boys with too few male role models.

It has also been suggested that more men are needed in the classroom to enforce “tougher” discipline, with women stereotyped as having a more “liberal” style when it comes to classroom management. But recent research actually shows that women also use “tough” discipline, just like men.
Talk the talk

Although previous research has examined “teaching” from a gender perspective, male teachers’ linguistic behaviour – how they interact with the children they teach – remains largely ignored. And with this in mind, I have recently conducted research into three London Primary schools – looking at how male and female primary school teachers actually interact with their students in the classroom.

Collecting data from both male and female teachers across several days of teaching, it was shown that both men and women use “masculine” strategies to carry out classroom management. This includes the use of direct orders and strict discipline.

And despite popular assumptions, it was shown that both men and women also use “feminine” or more “liberal” styles to discipline their students, with great success. This included softening criticism, mitigating orders and hinting at bad behaviour. In fact, it was men who were shown to do this more than women – showing how both male and female teachers use the stereotyped language style of the “other” sex. And this was also shown to be the same in earlier research I carried out looking at the linguistic behaviour of male nurses.

This strongly points to the need to move away from the stereotype that women linguistically behave in one way, and men in another. Gender is a “cultural construct”, and language is something we use to “perform” our identity. We can be both masculine and feminine, depending on what our current context requires, or even demands.

So what these teachers are doing is simply using speech styles that are effective. They are “doing” being an effective teacher, and gender should not be seen as a prerequisite for this effectiveness. Teachers must adapt their styles to suit both the situation in the classroom – and the child they are working with. This is what makes an effective teacher, and this is far more important than teacher gender.
Tackling gender roles

So while it is clear that we do need more men in the classroom, this is not because they can offer something women teachers cannot. Qualified male teachers are simply needed to tackle the deficit of primary school teachers that Britain – like so many other countries – is experiencing.

But this is not an easy task because primary school teaching is still seen as “women’s work” – which can often act to deter men from taking up the role. This can only be tackled if the longstanding assumptions that men and women cannot, or should not, undertake certain roles because of their gender are challenged.

Jobs, and all that they entail, must be de-gendered. And current research, including my own, may enable us to take a step towards this goal – and encourage more men to become primary school teachers.