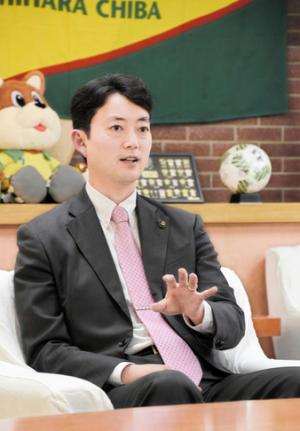 Online debate over the use of male nursery staff is heating up after the mayor of this city tweeted about some parents asking their daughters’ day care centers not to have male staff members help them get dressed.

The Chiba Municipal Government is set to launch a new 10-year plan in April to boost the number of male staff at city-run day care service providers. Chiba Mayor Toshihito Kumagai tweeted that the plan was a countermove inspired by incidents where some parents asked not to have male nursery staff dress their daughters, and the number of retweets and responses topped 20,000 over 10 days.

In April 2016, Kumagai, a father of a 5-year-old daughter himself, met with eight male day care staffers to exchange opinions. After hearing their stories, such as being taken off from work routines out of consideration for parents of girls who did not want male workers dressing their daughters, and a lack of men’s bathrooms at their workplace, Kumagai decided to map out the plan to promote the active engagement of male nursery staff. The Chiba Municipal Government’s department of child care has reported that directors at several day care facilities exclude male workers from supervising duties during the children’s dressing and shower time.

Under the municipal government’s plan, male nursery staff will be tasked with dressing children and changing diapers regardless of the child’s sex, they will be provided with men’s bathrooms and changing rooms and day care operators will be required to work on placing two or more male staff members if requested, among other policies. The plan also includes numerical targets — such as increasing the number of male day care directors from the current zero to five in the next 10 years and also raising the number of male chief nursery staff members from the current one to 10 over the same period.

Kumagai tweeted on Jan. 20, the day after he announced the plan, that behind the male nursery staff promotion plan “lie problems seen at day care centers such as parents’ requests like ‘I don’t want men dressing my daughter’ having been granted.”

While some Twitter users responded favorably to the mayor’s post, saying that even though their daughters were looked after at day care facilities hiring male nursery staff, they never thought about not wanting their daughters being dressed by male workers, others opposed to the plan, commenting that it should take the little girls’ “sense of embarrassment” into consideration and that respecting gender differences is not discrimination.

Some citizens are calling and writing the municipal government over the matter. By Jan. 30 the government office had received 18 pro male nursery staff comments and 16 opposing remarks. Kumagai has posted more than 60 tweets defending his policy plan and also summarized his thoughts on Facebook. The number of pro or con comments has since been piling up online.

Male nursery worker Takuya Shimojo, 30, at a private day care center in Kyoto told the Mainichi Shimbun that although he understands people have different opinions, it’s sad that they comment negatively about men changing diapers and dressing girls solely because they are men.

“I feel like we’re not recognized as professional workers,” he said, disappointedly. He added that he hopes this debate will lead to the better treatment of nursery staff as a whole rather than being focused on diaper changing jobs.