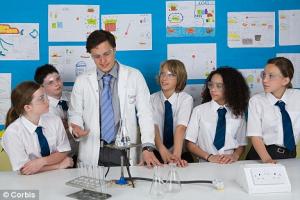 A generation of boys will encounter barely any male role models throughout their education, opposition MPs warned.

Figures disclosed by Schools Minister Jim Knight in a Commons written answer show that just 41 per cent of state school secondary teachers – including heads – were men last year. This is down from 47 per cent when Labour came to power in 1997.

Just 14 per cent of teachers in state nursery and primary schools are men – down from 16 per cent in 1997.

Experts are divided over whether male teachers confer specific benefits but Ofsted and Government research has suggested boys are less likely to disrupt lessons if taught by men.

The slump in recruitment of male teachers has been blamed on a perception among some men that teaching, especially of young children, is ‘women’s work’ and that they risk false child abuse allegations.

Stats have already shown that no men under the age of 25 work in state-run nurseries and there only a few dozen over-25s.

David Laws, Liberal Democrat education spokesman who elicited the figures, said: ‘The proportion of male teachers in our schools has now sunk to a record low.

‘This raises serious concerns about the lack of male role models in many of our schools.

‘It is particularly important that the current recruitment drive now focuses on getting more men to consider teaching as a profession.’

A survey commissioned by the Children’s Workforce Development Council (CWDC) has found that many parents believe that male teachers give boys someone to look up to.

Single mothers are particularly keen to see more male teachers because they wish their children to have more contact with men in caring roles, it found.

A sixth of single mums said their children spend less than two hours a week with a male role model such as a father figure, teacher or relative.

Previous research by the the Training and Development Agency for Schools (TDA), the Government’s teacher training quango, claimed that boys are more likely to disrupt lessons and neglect their studies if they are taught by women teachers.

Ofsted inspectors have called on schools to provide father figures for working-class boys who lack them at home.

They said boys should ensure that boys ‘good male role models’ because too many are growing up with poor attitudes to adults, especially women teachers