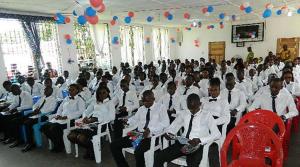 Giving the overview of the Cohorts-8 2016/2017 Academic Year on Monday, July 24, 2017 at the graduation ceremony, the Director of the Kakata Rural Teacher Training Program, Shadrach Y. Kerl, praised the trainers and other support staff for collectively contributing towards the successful completion of the program.

Mr. Kerl disclosed that over the period of the implementation of Cohorts-8, the administration of the KRTTI made tremendous achievements in the areas of the renovation of several dilapidated infrastructures on the premises of the institution.

He named the refurbishing of the once dilapidated Science Building Bathroom, 50 guest house and teacher lounge, among others.

Mr. Kerl noted further that the KRTTI is also faced with the major challenges including, the lack of reliably functioning vehicles to commute administrators and delivery of school materials, provision of student handouts, lack of science laboratory to capacitate trainers and trainees to carry on scientific experimentation, revamping of structures at the institution’s farm, among others.

Commenting on the involvement of the KRTTI in the Human Resource Development at the institution, Mr. Kerl said: “The KRTTI, like other Teacher Training Institutes, has the national mandate to prepare qualified, competent human resource man power in the area of teacher’s education since from the1960s.

In 2015 the administration engaged in attacking KRTTI’s problems in two crucial areas namely: quality academic performance-based process which is administered to indicate whether there is an improved behavioral change”.

The KRTTI Director explained that these instructional processes can inform the trainers to provide remedial sessions to close learning gaps that may be noticed or identified.

Mr. Kerl, used the occasion to call on the government of Liberia to consider reintroducing the pre-service program in the Liberian educational system.

He revealed that there are still teachers in the classroom who lack the basic training, urging the government to tackle this problem.

For his part, Margibi County District #4 Representative Ben A. Fofana who served as the keynote speaker of the program told the graduates that as they leave the walls of the KRTTI, they must take into consideration that there are lots of challenges ahead of them mainly the lack of sufficient funding.

Some of the challenges according to him are still persistently facing the sector and will have an impact on the quality of their work as they go back to their various communities.

He said that they will also need to apply their leadership skills and training to understand the challenges instead of engaging in such activities like go-slow actions, striking and or refusing to teach until compensations are received.

He added that scarcity of professional teachers and faculty members should not be used to demand more compensation than that which is budgeted for by the institution.

Doing such thing, the lawmaker noted will create the scenario of delay in payments and the inability to receive payments from their various entities.

He added that the current trained teachers’ statistics shows slanted relationship toward female teachers, which they must change for the good of the system.

Hon Fofana also stated that: “However, as the educational ladder is ascended, the share of trained female teachers declines dramatically.

At the primary level, trained female teachers decline to 16%, junior high level 5% and senior high 4%. The reverse is true for the trained male teachers.

It is time for us to encourage more female teachers at all levels of the education system and treat them with special care.”

The graduation ceremony was graced by scores of educators from other rural teacher training institutes across the country and Ministry of Education, local officers of Margibi County and parents of the graduates.