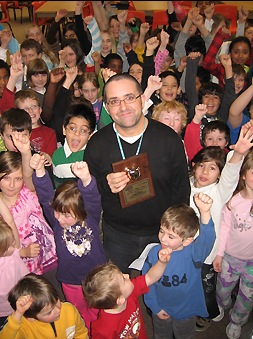 Infant kindergarten teacher Greg McGlynn stands among a group of students after receiving the Magic 100 Golden Apple Award on Thursday.

There was a time, not that long ago, when the ultimately sign of respect a student could show his teacher was to place a shinny red apple on the teacher’s desk.

On Thursday, Greg McGlynn, a kindergarten teacher at Divine Infant Catholic School in Chatelaine Village, received a shinny apple of the golden variety as a recipient of Magic 100’s Golden Apple Award.

A shocked McGlynn was presented the award, along with a cheque for $500, by Magic 100 radio personality Bill Parker in front of the school’s students who had been assembled in the library.

“I’m very surprised and embarrased. I’m kind of like the rookie on the staff,” said McGlynn who first started working at the school as an occasional teacher in 2004. “Just being compared to the rest of the staff is a huge honour. I feel I still have a lot to learn.”

McGlynn was nominated for the award by parents John and Sharon Mele who have two children in his class, one in Junior Kindergarten, the other in Senior Kindergarten. They also have a third child who McGlynn taught, who is currently in Grade 3.

“When I first started writing the letter I was trying to decide which teacher to nominate because our kids have had a few teachers here and they’ve all been excellent,” said Sharon Mele. “We picked Greg because he’s an amazing teached and he’s also the only male teacher on the staff.”

“Both our boys have just thrived with him. Last year, Bruno, our oldest, didn’t really want to come to school. This year he’s totally different. He really likes coming to school.”

McGlynn says his primary task as a kindergarten teacher is to make the experience fun so that the kids are instilled with a sense that coming to school is an enjoyable experience. It’s a philosophy that has been born out of his own experience in the early learning years.

“I remember my first couple of years, I really struggled. It wasn’t until I came across I really great teacher in Grade 2 that I started to really enjoy coming to school,” said McGlynn. “In fact, I still have flashbacks when I’m teaching my own kids.”

“I’m a big leaf fan and we joke about it all the time in class,” said McGlynn sporting a golden smile.