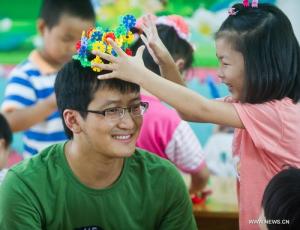 Scholars, heads of kindergartens and representatives from education departments concluded that the lack of male kindergarten teachers in China could be detrimental to the balanced development of children. The conclusion was made at an education seminar held in Hangzhou, capital city of eastern China’s Zhejiang Province, on June 21, 2012.

Xu Bangqiang, vice-principal of a kindergarten in southern China’s Guangdong Province, said that male kindergarten teachers have certain advantages in education as they often have different ways of correcting and communicating with children.

Member of the National Committee of Chinese People’s Political Consultative Conference (CPPCC) and professor from Shandong University Xie Shijie also said it is particularly important for boys to have positive male role models as they grow up.

As for China, Fan said that the proportion should be 10 to 20 percent, according to the country’s basic national conditions.